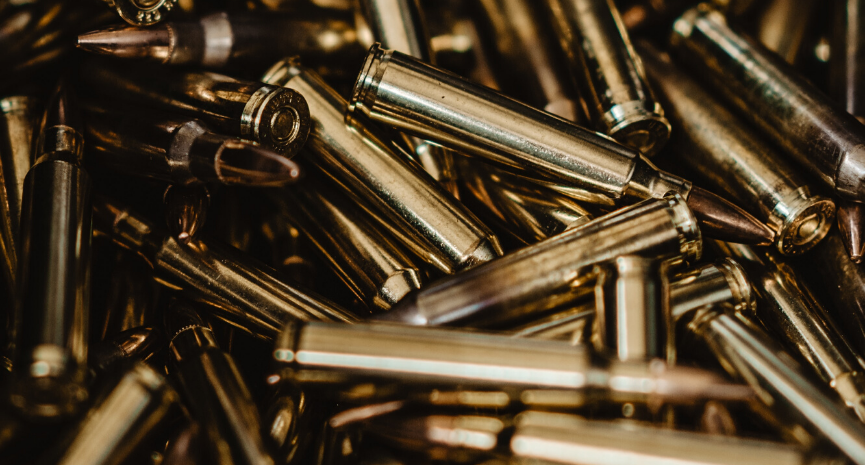 The .224 Valkyrie round is relatively new to the market and is brought to you by Federal to deliver extra long-range power in a small platform modern sporting rifle. As with all kinds of rounds on there, there are plenty of ammo options for you to choose from. We understand that picking the right one may be a little complicated, hence we have shortlisted some of the best ammo you can find for your .224 Valkyrie rounds.

.224 Valkyrie Review – How to Choose the Best Ammo for Your Rifle?

Developed by Federal Premium, the company has been producing a wide range of cartridges to suit the .224 caliber. When looking for an ammunition, it is always advisable to pick one from well-established, reputable manufacturers, such as Federal and the other entries in our list.

While the .224 Valkyrie bullet is very well-designed, not all projectiles are created equal. For example, a full metal jacketed bullet may come in various designs and quality. Besides, different tasks and applications call for different bullet designs.

If you’re taking your .224 Valkyrie rifle out for hunting, it is likely that you’ll want the greatest possible expansion, but this is not necessarily the case for those taking their gun out for target shooting. In our list, we have provided several different options to suit all kinds of shooting purposes.

Established in 1916, Federal Premium has had years of experience in the firearm industry. Now owned by Vista Outdoor, the company is headquartered in Anoka, Minnesota. As the proud developer of the .224 Valkyrie, Federal has been taking plenty of initiatives to push the round heavily by producing a wide range of cartridges specific for this caliber. As such, it is no surprise that this company has secured several spots on our list.

Other than delivering supreme quality, Federal’s American Eagle Ammo is most notable for its affordability, making it the ideal choice for plinking and target practice. Don’t let the low price fool you though, all the components involved in the ammo’s manufacture are of very high quality, making for an accurate and reliable cartridge. The powder and primers used have been specially sourced to avoid any occurrence of fouling on your firearm.

Federal’s American Eagle Ammo has been designed specifically to help you develop your skills at the shooting range. Loaded with a 75-grain total metal jacket body, this ammunition shoots out at a rated velocity of 3,000 feet per second and a muzzle energy of 1,499 foot-pounds. This powerful round offers a good .400 ballistic coefficient and comes in boxes of 20.

As the developer of the .224 Valkyrie, Federal Premium has been created the perfect ammo for you to practice at the range. The top features of the American Eagle Ammo .224 Valkyrie 75gr Tmj include the non-fouling primer and powder on top of its great affordability. If you need a large amount of .224 ammo for plinking and target practice, there’s certainly no other choice better than this. 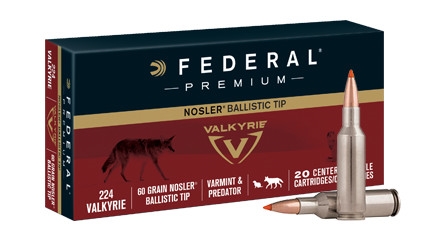 As mentioned earlier, Federal Premium has been hard at work to create a wide range of .224 Valkyrie rounds to drive up the popularity of this revolutionary cartridge. The manufacturer has specially optimized this .224 Valkyrie 60gr round for long-range varmint hunting. Even at extreme distances and stiff winds, you can count on these rounds to shoot out at an impressive speed to minimize any drop and wind drift to stay on target, even on tiny varmints.

Federal Premium .224 Valkyrie 60gr features a small billet weight to ensure minimal pelt damage for those who enjoy putting a nice coyote’s skin to good use. On top of that, this ammo even comes with a thin jacket to produce massive energy exchange without any over-penetration. This works well to give you nice, clean kills on tougher predators.

Federal Premium’s .224 Valkyrie 60gr is a total game-changer in the varmint hunting field. You shouldn’t be surprised to find the .224 rounds in the top choices for varmint hunting in a year or two thanks to this powerful ammo.

Operating out of its Nebraska headquarters since 1949, Hornady has garnered a great reputation for quality without the fancy price tag. This popular manufacturing company has even stepped foot into the .224 Valkyrie game in a big way with their high-end match-grade Eld Match .224 Valkyrie ammo.

For marksmanship competitions, everyone knows consistency is king. This is why Hornady ‘s ammo goes through extra-stringent quality control to ensure each and every round does not disappoint. Every component is rigorously selected and checked for uniformity. After that, the loading process is then calibrated to exacting tolerance to provide rounds with unrivaled accuracy.

The Hornady 88-grain Extremely Low Drag (ELD) Match bullets are easily some of the most technologically advanced bullets you can find on the market. With a proprietary Heat Shield tip, the ammunition works to retain its aerodynamic shape in all conditions. Both ogive and boat-tail are even optimized to ensure the bullet is concentric, accurate, and consistent.

Utilizing the Doppler radar to verify their bullet’s ballistics, the Hornady Eld Match .224 Valkyrie Ammo is one of the few rounds that work accurately both at close and far ranges with a muzzle velocity of 2,676 feet per second and muzzle energy of 1,398.

Hornady is always a good choice if you’re looking for match-grade ammo with an unbeatable value for money. The best parts of these rounds are obviously the technologically advanced bullets and precision manufacturing process. If you need an accurate round without breaking your bank, then this could be the one for you. 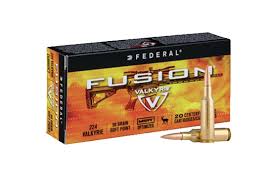 Sporting an optimized design like the .224 round itself, the Federal Fusion MSR line of ammo is perfect for use with modern sporting rifles. The projectiles are Federal’s Fusion Soft Point with an optimal weight of 90 grains, perfect for tactical purposes. The jackets on the ammunition are even molecularly bonded to a pressure-formed core in a process that works to increase the round’s accuracy.

With a ballistic coefficient of .424, the Federal Fusion .224 Valkyrie 90gr Ammunition propels out of the firearm cleanly and quickly to reduce flash while helping to raise projectile velocity. On top of that, the Federal Fusion .224 Valkyrie 90gr Ammunition even comes with primers that are designed to work well with free-floated firing pins. Each case has been checked to verified to ensure they go through an annealing process with a coloration system.

The Federal Fusion .224 Valkyrie 90gr Ammunition is the perfect choice for hunting down medium-sized game such as a deer and pronghorn. They are also great for target practice, as it is a good idea to practice with standard hunting or tactical rounds to ensure you get used to its ballistics and felt recoil. All-in-all, this is a great all-rounder option for off-range work.

The top features of the Federal Fusion .224 Valkyrie 90gr Ammunition are its optimization for modern sporting rifles and the usage of fast, clean-burning powders. The .224 Valkyrie was designed with these types of rounds in mind. If you want to bring your .224 Valkyrie rifle to its full potential, then this is certainly a great place to start. 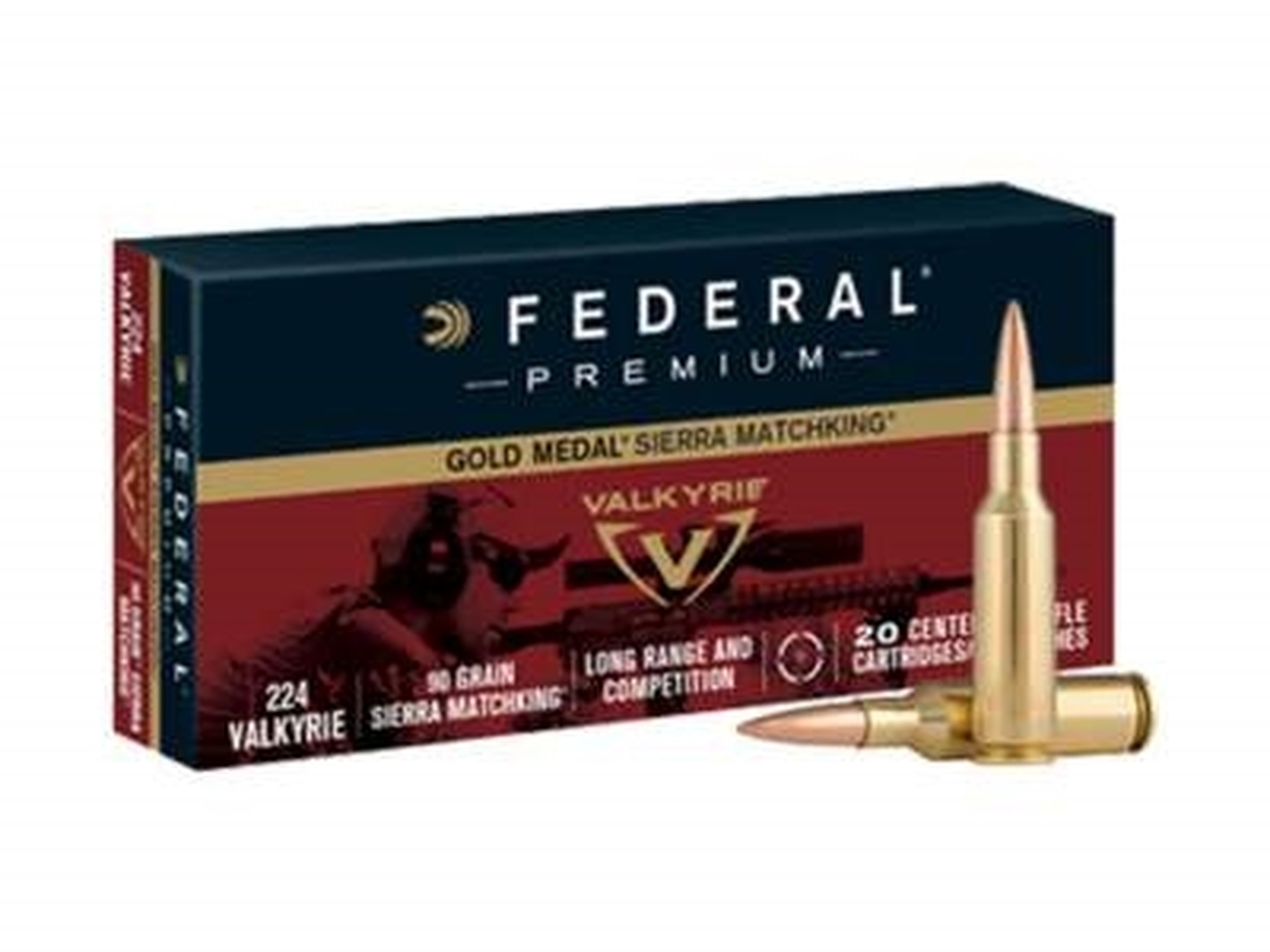 Knowing that the .224 Valkyrie rounds were designed for long-range shooting, this list of ammunition would certainly not be complete without one that is designed to take on long-range targets. The Federal Gold Medal Sierra Matchking .224 Valkyrie 90gr rounds are close competitors to the Hornady option discussed above. The rounds come with projectiles from Sierra, which is a top-range American producer of excellent match-grade bullets.

The Sierra MatchKing Boat-Tail Hollow Points feature a thick jacket to ensure better precision and accuracy to make them one of the most successful bullets in the competition scene. On top of that, the ballistic coefficient on these 90-grain bullets is outstanding at .563.

The Federal Gold Medal Sierra Matchking .224 Valkyrie 90gr comes with unique primers that are extra sensitive to ensure consistently reliable function and ballistics. With a specially formulated propellant, the ammunition is able to clock in a muzzle velocity of 2,700 feet per second.

Although long-range target shooting has been the domain of the 6.5mm range calibers and few other long action rounds, the .224 caliber is slowly taking over thanks to ammos like Federal Gold Medal Sierra Matchking .224 Valkyrie 90gr. All you need to do is to make a few simple and affordable modifications to your AR-15 to start joining the exclusive club of long-range shooting.

The Federal Gold Medal Sierra Matchking .224 Valkyrie 90gr are high-end bullets that come with equally high-tech primers. There is no doubt that you’d experience a difficult time searching for other long-range target ammos as consistent and accurate as this one here. Simply get a box or two to get a feel of what your .224 Valkyrie rifle is truly capable of.

It is without a doubt that the .224 Valkyrie has made a huge breakthrough in ballistic technology. Of all the attempts to create better rounds to go with your AR-15 rifle, this is certainly the most promising. However, to truly enjoy the benefits of any caliber, it is crucial to find the right ammo for it. Hopefully our guide has been helpful in your search for the right .224 Valkyrie ammunition.

How accurate is the .224 Valkyrie rifle?

The .224 Valkyrie rifle is accurate at about 1,300 yards. The .224 caliber offers an amazing long-range round that can is comparable with the 6.5 Grendel thanks to its supersonic speed even at 1,300 yards out.

In fact, the .224 Valkyrie rifle is 25% more accurate than the 6.5 Grendel when tested with targets that are 1,000 yards away. Firing off in a 10 MPH crosswind, the Valkyrie’s bullet drop is also significantly less than both the 6.5 Grendel and .223 Winchester.

Is .224 Valkyrie good for deer hunting?

The .224 Valkyrie is a perfectly viable cartridge for deer and antelope hunting. This is mainly due to the fact that the Valkyrie has a suitable bullet range and an impressive trajectory of up to 1,000 yards away.

What is the .224 Valkyrie Best Used For?

The .224 Valkyrie is best for long range shooting, which is similar to 6.5 Creedmoor in a standard AR 15. You can even take on larger games like hunting antelope as you can easily hit over 1000 yards with your AR 15.

Bear in mind that .224 Valkyrie comes in different bullet weights for different purposes. For instance, 60 grain bullets are excellent for hunting varmint at any given distance whereas 75 grain bullets will be a versatile and affordable bullet option. Besides that, 90 grains are ideal for competitive purposes such as taking part in Precision Rifle Series and also, 100 grains is best used to hunt medium-sized games.