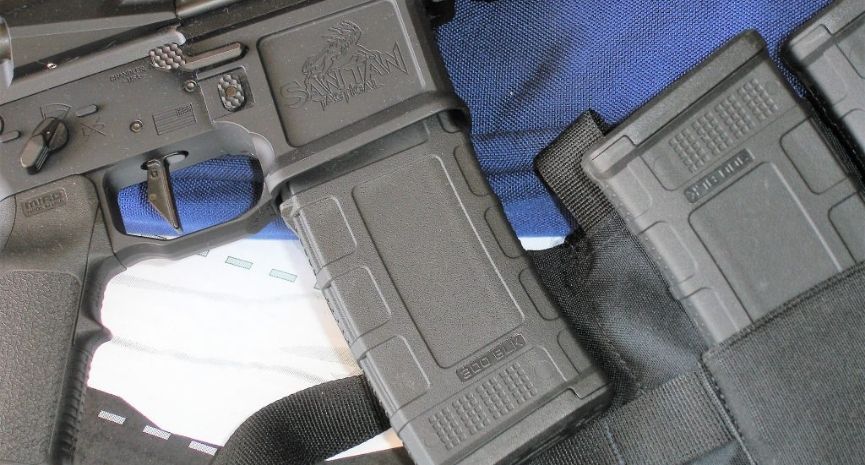 This is particularly useful when you are using subsonic ammunition which is slightly longer and heavier. As such, these subsonic .300 Blackout rounds would sometimes have issues in 5.56magazines. Thinking about your next upgrade? You are at the right place!

Factors to Consider for A .300 Blackout Magazine

Hence, it would be best that you opt for a dedicated .300 Blackout magazine. Another thing to highlight, you should never fire a .300 Blackout round in a 5.56 rifle as this could lead to disastrous results and possible injuries to you.

Most AR-15 rifles would come with aluminum factory OEM magazines. Although most of them are reliable, these magazines are prone to the common wear and tears, or overtime, you might have some problems with bending the feeder lips usually after you’ve dropped them on a hard surface.

That’s why you’d want to look for polymer-made magazines as they cannot be bent like aluminum, but may crack and break. Nonetheless, many shooters would still prefer polymer magazines since most manufacturers come out with great polymer magazines. These magazines are usually thin and translucent/comes with a built-in window in order for you to notice the number of remaining .300 Blackout rounds.

You would want to choose one that comes with internal geometry adapted to allow a broader range of .300 Blackout bullets to be loaded. In avoiding double and triple feeds, dedicated .300 Blackout magazines have an internal front guide rib that is positioned to improve to work with a broader variety of .300 Blackout rounds.

In relation to lubrication, any commercial-available magazines adopt the Teflon based ‘self-lubricating’ follower to eliminate friction. This still works pretty well so you won’t have friction/lubrication issues with your .300 Blackout magazine as you shoot and reload. 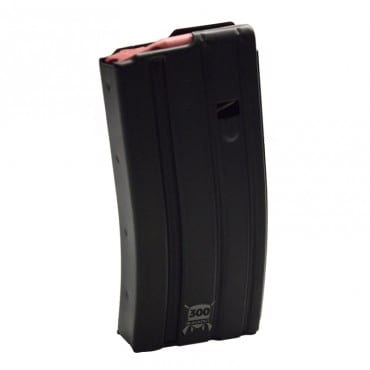 The manufacturer of this magazine – D&H Industries makes various accessories and compartments for AR-15s and this includes great quality magazines like the D&H AR-15 300 AAC Blackout 20 Round Magazine. This magazine is available in capacities of 10,20, and 30 rounds that comes with a slick black or grey finish to match your .300 Blackout rifle well.

With the body constructed from heat-treated aircraft-grade 6061-T6 aluminum and encompassing 17-7PH stainless springs that were pre-compressed, you can expect the D&H AR-15 300 AAC Blackout 20 Round Magazine to last you for many years to come without looking for a replacement. In addition, the magazine is Teflon coated for better lubrication to encourage smoother feeding.

Unlike your standard straight 20 round 5.56 NATO mags, the D&H AR-15 300 AAC Blackout 20 Round Magazine features an internal rib that’s positioned to enhance its functions with a broader variety of projectiles among the .300 Blackout round.

D&H Tactical is known as the leading supplier of aluminum magazines that utilizes altered dimensions that make their magazines more versatile. As a dedicated magazine, the D&H AR-15 300 AAC Blackout 20 Round Magazine should be your number 1 choice for most heavy sub-sonic .300 Blackout rounds.

You want smooth feeding. The D&H AR-15 300 AAC Blackout 20 Round Magazine features a constant-curve internal geometry. Along with D&H’s proprietary red anti-tilt self-lubricating follower, feeding will be a breeze.

You use ultra-long bullets. Unfortunately, even a great product like D&H AR-15 300 AAC Blackout 20 Round Magazine as its shortcomings. Some users have mentioned that when handloading with ultra-long bullets, they may get jammed up in the magazine, 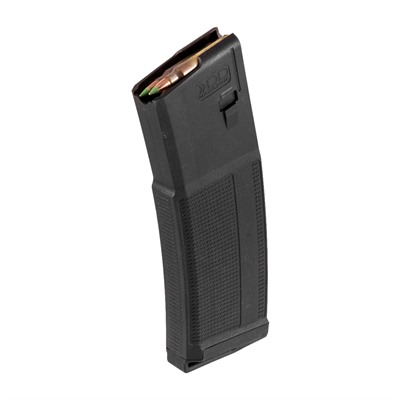 If you hadn’t known already, Daniel Defense has been known for its top-tier rifle offerings including some of the rifles we have reviewed for many years. Recently, they have introduced a range of AR-15 accessories and have established new standards in manufacturing rifle magazines.

Perhaps the most notable feature of the Daniel Defense 5.56mm 32rd Magazine is its increased capacity of 32 cartridges, which would be 2 more than your usual high-capacity AR magazines in the market.

In relation to the magazine’s construction, the Daniel Defense 5.56mm 32rd Magazine weighs pretty light as it is constructed from carbon fiber-reinforced polymer. Besides that, it also comes with an improved feed-lip design and enhanced anti-tilt snazzy bright yellow follower for better and smoother feeding.

You want a magazine that’s built to last. The Daniel Defense 5.56mm 32rd Magazine comes with an impact-absorbing baseplate design at the bottom which will absorb most of the shock when you drop the magazine on a hard surface. As such, it would prevent any breaks and cracks from accidental droppings.

You want higher capacity. As mentioned above, the Daniel Defense 5.56mm 32rd Magazine comes with a stunning 32-round capacity, which is 2 more compared to your usual high-capacity magazines and still has the same size. 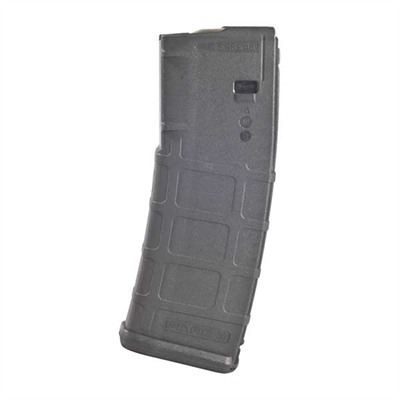 The ,300 Blackout cartridge was initially designed to be used along with other magazines. However, due to the wide range of weights and shapes for the .300 Blackout round, the potential of the round is often limited in such a scenario.

The Magpul – AR-15 300 BLK PMAG 30 Gen M3 Magazine comes with an improved impact and crush resistant polymer, slightly modified side ribs, and a new and aggressive front and rear texture for better control of your .300 Blackout rifle even under harsh weather conditions.

The magazine’s internal geometry features a constant-curve which was designed to accommodate a wide variety of rounds used in .300 Blackout cartridges. In Magpul’s efforts to improve the magazine’s reliability, the magazine comes with a new, patented, low-friction, 4-way anti-tilt follower.

Besides the distinct rib pattern, the Magpul – AR-15 300 BLK PMAG 30 Gen M3 Magazine’s follower and internals are molded from a bluish-grey polymer to clearly differentiate them from the previous M2 internal parts to prevent cross-loading issues,

The Magpul – AR-15 300 BLK PMAG 30 Gen M3 Magazine features a redesigned bolt catch notch in the rear of the magazine to allow more dynamic magazine changes without any over-insertion.

You want a magazine that’s built to last. The all-new Magpul – AR-15 300 BLK PMAG 30 Gen M3 Magazine comes with the latest material technology for enhanced strength and reliability to built to exceed even the rigorous military performance specifications. 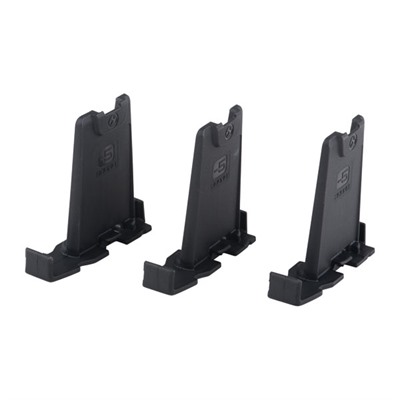 Shorter magazines are great for coyote, deer, and hog hunting. Besides that, if you are doing bench shooting or zeroing in, you won’t want to miss out on the Magpul Minus 5 PMAG Round Limiter.

High capacity magazines are great, but they are banned in several US states and by many hunting authorities. Hence, if you own a modern sporting rifle, you would be requested to buy 5-round magazines or use a smart solution known as the Round Limited, a device that’s built for capacity reduction.

The Magpul Minus 5 PMAG Round Limiter will save you from wasting tons of money on 5-round magazines by reducing your 20 or 10-round 5.56/.300 Blackout magazine capacity to the correct political capacity.

These Minus 5-Round Limiters are versatile. They are compatible with the Magpul Gen M3 Pmag magazines and would have no problems in restricting their capacity by 5 rounds. Even a 10-round magazine with the Magpul Minus 5 PMAG Round Limiter would work fine without feeding issues.

In terms of installation, it’s pretty easy and straightforward. You only need to slide the cover off and remove the bass from the spring to insert the limiter. As such, you will temporarily transform your higher-capacity magazine into a hunting-ready magazine.

You are a hunter. The Magpul Minus 5 PMAG Round Limiter is the perfect gear for you to use in 10-rounders especially for hunting purpose where the law only allows a 5-round capacity magazine.

You want 5+1 loads. Unfortunately, the Magpul Minus 5 PMAG Round Limiter does not work with the bolt close with 5 rounds, hence upon loading the first round, you will only be left with 4 rounds in your magazine. 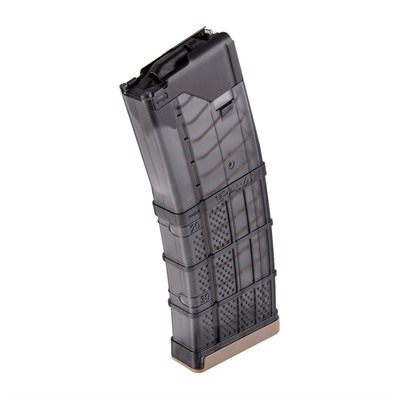 Talk about big names in the AR industry, and the first brand that comes into most people’s minds is Magpul Industries Corp. Magpul’s products have been the preferred choice among military, police, and firearms enthusiasts’ worldwide.

The ​Magpul – AR-15 30RD PMAG GEN M2 MOE Magazine is a lightweight polymer magazine that features stainless steel internal springs and anti-tilt followers that are molded in a greenish-grey color.

The magazine’s self-lubricating one-piece body of the follower is connected with a heat-treated, stainless steel spring that will be able to withstand the heat even from prolonged full-auto fire. Besides that, the Magpul – AR-15 30RD PMAG GEN M2 MOE Magazine also comes with a textured gripping surface along with an exterior ribbing to provide you with better handling when things get wet, dirty, and under stress.

Unlike the older models, the ​Magpul – AR-15 30RD PMAG GEN M2 MOE Magazine features a flared magazine floorplate for better handling and disassembly. This affordable .300 Blackout magazine would allow you to store your dust cover on its floorplate when not in use.

Featuring an impact-resistant polymer construction, it makes the ​Magpul – AR-15 30RD PMAG GEN M2 MOE Magazine a pretty decent alternative to an aluminum .300 Blackout magazine as polymer products do not bend like aluminum.

You are on a tight budget. Available on brownells.com for only $12.99, the ​Magpul – AR-15 30RD PMAG GEN M2 MOE Magazine will be within the range of most shooters’ budget. Along with that, you will be getting one of the best 30-round .300 Blackout magazines for this price in the market.

You want dust covers. Unfortunately, Magpul does not send impact/dust covers along with the ​Magpul – AR-15 30RD PMAG GEN M2 MOE Magazine. You will need to purchase them separately. That said, for only $12.99 and considering the quality of the magazine, it’s still a pretty affordable deal.

Yes. Within 200 yards, you won’t have an issue with larger animals like deers, pigs, and varmint because of the added weight of the .300 Blackout round. With extra weight, comes extra power, which is exactly what you need for hunting.