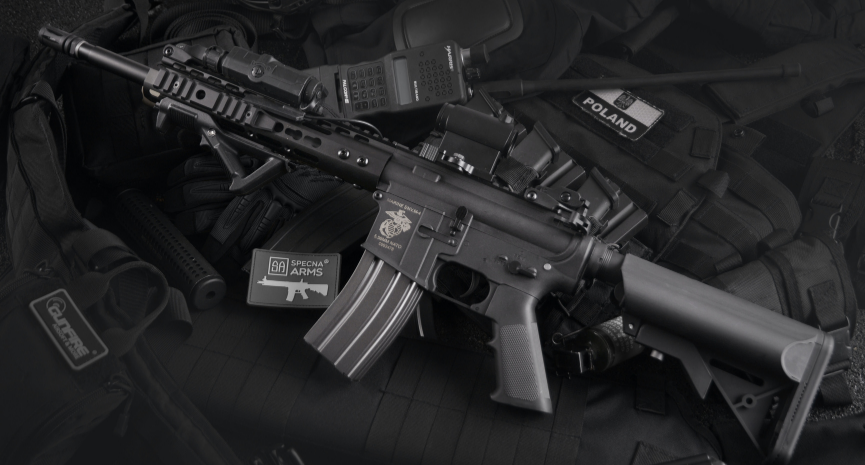 The 7.62x39 cartridge is one of the most widely used and easily available ammo on the planet thanks to the widespread use of the AK-47’s. Regardless, the cartridge is legendary in its own wake and has been proven to be super effective and useful.

In today’s article, we will talk about the benefits of icing this caliber and how you can easily transform your AR-15 to handle them. After that, we will also review some of the best AR-15 7.62x39 uppers on the market.

While lower receivers are not caliber specific, upper receivers are. The parts that make an upper receiver cartridge specific include the bolt, chamber, and barrel. This means that you’ll need a specific upper in order to shoot a 7.62×39 round from your AR-15. There are reports of people trying to shoot similar-sized bullets from closely chambered uppers, but that usually ends with a disaster sooner or later.

A 7.62×39 cartridge features a different rim size and dimensions compared to a 5.56 bullet. The uppers featured in our article below can be swapped right over your existing AR-15 lower receiver to convert the caliber fired.
Upgrading your AR-15 5.56 upper to a 7.62×39 comes with several benefits, all of which are related to the versatility of the 7.62×39 round and its effectiveness for both short and long-range shots. Below are some of the benefits of a 7.62×39 upper:

Considering the size, it is no surprise to find that the 7.62×39 cartridge is more powerful than the 5.56 and is big enough to kill a mid to big sized game that’s located about 300 yards away. A 7.62x39mm round carries plenty of energy within the range of 300 meters. However, you may experience a significant bullet drop after the 300-yard range. Nonetheless, it still has more stopping power compared to the 5.56×45 cartridge, making it a good choice for both hunting and self-defense purposes.

The 7.62×39 round is a versatile cartridge that can be used for hunting, practice, self-defense, and almost any other application you can think of. The ballistics and power of the round make it very effective within the range of 300 meters. Additionally, these rounds have plenty of taper near the base to promote flawless extraction.

The 7.62×39 is manufactured in large quantities across the globe, making this one of the cheapest calibers available on the market. If you’re one of those that enjoy spending more time practicing with your rifle, then using a 7.62×39 round will help you save plenty of money.

Factors to Consider when Choosing a 7.62×39 AR Upper

Here are a few qualities you should take note of when picking a 7.62×39 upper for your AR-15 platform:

Most receivers are made from 7075 T6 aluminum but the catch here is to check the process used for manufacturing them. Forged receivers are the strongest but they tend to be on the heavy side. Billet machined receivers offer a good mix of durability and weight while cast receivers are quite lightweight but not as durable.

A complete receiver will come with all the components necessary such as the BCG, barrel, handguard, forward assist, and rails. However, a stripped receiver is simply just a block that lets you customize the rifle parts according to your own individual preference. However, getting a complete receiver gives you the advantage of value for money and protects you from the hassle of finding parts.

The term compatibility is in relation to the lower receiver and other accessories on the rifle. The upper should have an appropriate handguard and top rail to let you mount your favorite accessories and optics.

Based on the factors discussed above, below are some of the best 7.62×39 upper receivers that we’ve shortlisted for you. These are the best in their class and come included with a fair price tag respective to their qualities.

This PSA KS-46 upper is an integrated design between the AK-47 caliber and AR-15 platform. Machined from Forged 7075 T6 aluminum, this upper bears the aesthetics of a classic M16 rifle with the cylindrical handguard and front sight.
The receiver has also been designed to work with the KS-47 lower since the rifle only accepts AK-47 magazines. The upper has an integrated over-insertion tab to prevent the bolt from dragging into the magazine.

The upper features a barrel made from CMV 4150 steel with a 1:10 inches twist rate and a single large feed ramp to accommodate the 7.62×39 round. The barrel is also nitride treated for better accuracy and easy cleaning. The muzzle end of the barrel comes with ⅝-24 threading and an A2 flash hider. Included in the whole package are a dust cover, forward assist, and charging handle. As for the BCG, it’s designed to work amazingly with AK-47 magazines and features an extended firing pin. Both the bolt and carrier are made from nitride treated steel.

The bottom line is that a PSA KS-47 receiver is a one-of-a-king upper for building a reliable rifle to take on the 7.62×38 round. The receiver also accepts standard AK-46 magazines that are readily available on the market. However, the handguard may be outdated, so you might need to replace it for mounting accessories.

With an 8.5-inch heavy profile barrel, this upper can be used flawlessly for high volume shooting. The barrel also has a 1:10 twist rate and a ⅝-24 muzzle thread to accept muzzle devices. However, it does already come installed with an A2 flash hider for your convenience. The single large feed ramp also works to ensure flawless operation of the receiver with 7.62×39 rounds.

The upper also features a free-float handguard with M-Lok holes to accept your favorite slings as well as other QD accessories. Other than that, the handguard is lightweight and the free-floating design ensures that it won’t interfere with barrel harmonics.
The top rail runs through the receiver and the handguard to provide ample space to mount extra accessories. This is also a complete upper that comes with a forward assist, dust cover, and BCG. In simpler terms, it is just a shortened version of the KS-47 receiver discussed above. The KS-47 pistol length rifle is the ideal choice for self-defense situations and close-range hunting as the heavy profile barrel makes strenuous shooting reliable.

3. Faxon Firearms ARAK-21 Upper Receiver – The Best for the Money 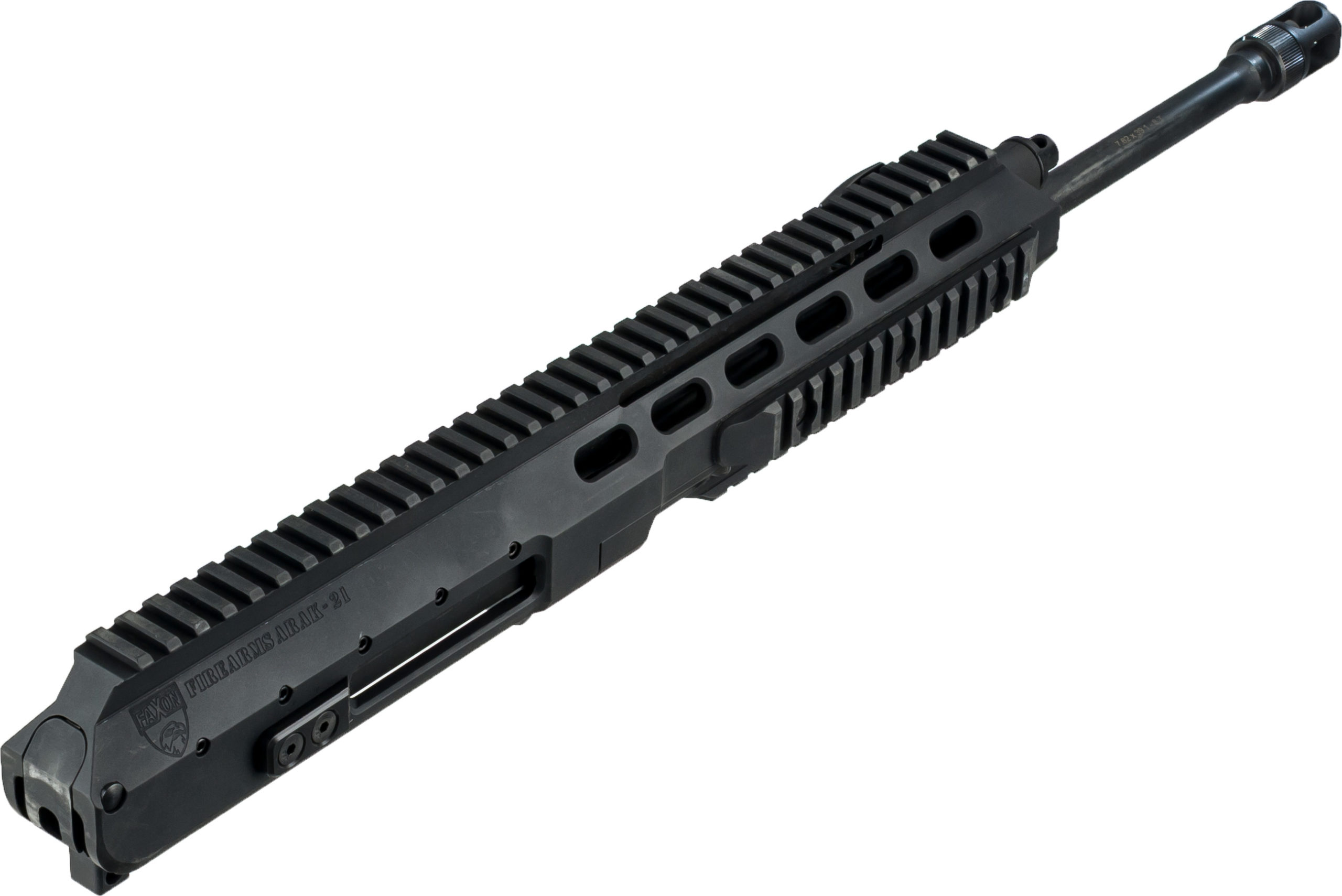 The ARAK-21 upper receiver is yet another model that’s an ingenious blend of the AK-47 and AR-15 rifle. This upper even features a gas piston operated bolt just like the AK047. The gas block is also adjustable so that you can tune it pertaining to the ammo you’re shooting. The only removable part of this assembly is the gas adjuster knob that comes with four different settings.

The receiver is also fully machined from aircraft-grade 6061 T6 aluminum so that you won’t have to worry about durability with this. With a full-length rail on top and another three rails on the handguard, this upper lets you mount your favorite accessories on all four sides.

It also has a non-reciprocating charging handle that has an ambidextrous to suit both left and right-handed shooters. The charging handle can also be relocated from the left to the right-hand side without any tools. The receiver even eliminates the need for a buffer spring since it has a self-contained mechanism, much like the AK-47.

The bottom line is that the ARAK-21 upper receiver is something exceptionally new for AR-15 users. This ambidextrous gun can even be instantly converted to the left or right hand-operated by a simple switch of components.

Radical Firearms is a popular upper and parts manufacturer for the AR platform and this is an amazing example of their quality craftsmanship. The RF 7.62×39 is a semi-complete receiver that has an intricately designed receiver, handguard, and barrel but does not include a BCG.

Made from forged 7075 T6 aluminum with melonite coated heavy profile barrel, this RF upper has a barrel length of 16 inches and a twist rate of 1:10 inches with an A2 flash hider on the muzzle end. The muzzle’s also threaded with ⅝-24 threads to accept AK-47 compatible muzzle devices.

Other than that, the upper also features a skeletonized M-Lok handguard that’s appropriate for mounting accessories. The Picatinny rail on top of the receiver runs all the way from the handguard to the charging handle to provide ample mounting space. Additionally, you also get a forward assist and dust cover with this upper.

Overall, this Radical firearms upper receiver is a great budget option for shooters who like to customize their rifle setup. This is a semi-complete upper with everything you need except the BCG.

Featuring an aesthetically pleasing and durable upper design, this 7.62×39 receiver comes with a 17-inch barrel made from 4150 chrome-moly steel and black nitride finish. The upper also comes with a carbine length gas system and a 1:10 barrel twist rate that’s ideal for shooting heavy grain ammo.

On top of that, the entire receiver is even hardcoat anodized to resist wear and tear caused by frequent usage. On top of it, you have a rail running over the receiver whereas the handguard has patches on the rail on the front and rear ends for you to mount accessories.

The handguard also has M-Lok ports for you to mount your preferred slings or any other compatible accessories. Similar to the one reviewed above, this upper comes complete with all the components except the BCG.

The bottom line is that the Grid Defense AR-15 7.62×39 upper features a good design and a properly balanced weight. The nitride finish components also run smoothly and are easy to clean, making it a great choice for both tactical and hunting applications.

The 7.62×39 cartridge is versatile ammo that can be used and relied on for many different applications. The rounds pack a whole load of punch to help you knock down large targets at a long range with sheer force. By adding a 7.62×39 upper onto your rifle will let you enjoy the power of this heavy caliber without having to change your familiar AR-15 platform. Hopefully, today’s review article has given you sufficient information and insight into what makes the best 7.62×39 AR uppers for you to make an informed purchase. We are confident that picking one from our list above will ensure continued performance that’s accurate and reliable.