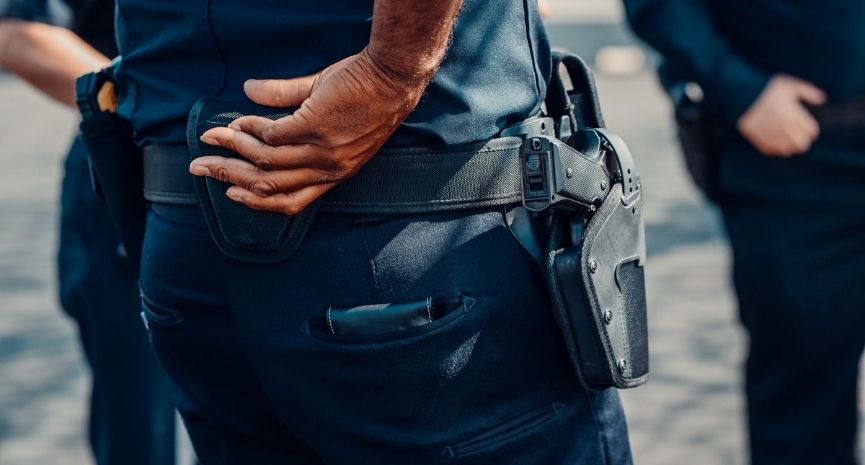 Maine is a state with a shall-issue, permitless carry law. The concealed carry permits are issued at state level by the Department of Public Safety through the Maine State Police. No permit, background check or firearms registration is required for the purchase of a handgun from a private individual.

Both open and concealed carry are legal in Maine without a permit for residents that are at least 21 years of age (or 18 years of age for members of the military that are on active duty or honorably discharged) who can legally possess a firearm and is allowed to carry a gun openly or practice concealed carry.

Maine is a Castle Doctrine state with no stand your ground law, so an individual has a duty to retreat outside of his or her dwelling place.

Use of Force in Defense of Premises

Physical Force in Defense of a Person

A person is justified in using a reasonable degree of non-deadly force upon another in order to defend the person or a third person from the imminent use of unlawful, non-deadly force by the attacker. However, such force is not justifiable in the event that:

A person is justified in using deadly force upon another person when the person reasonably believes it is necessary and when the other person is:

However, deadly force is not justified if he or she provoked the encounter or knows that he or she can complete safety retreat from the encounter, surrender the property to the person, or comply with a demand for that person to abstain from performing an act that he/she is not obliged to perform.

What Are the Differences Between Federal Laws and Maine Gun Laws?

Both state laws and federal laws have some differences but the main one typically depends on which government makes the rules and prosecutes offenders who violate the laws.

There are also slight differences between federal law and Maine gun laws such as laws that concern black powder or antique firearms. These are not considered a gun on federal level, but Maine still categorizes them as a firearm.

Individuals Prohibited from Owning a Firearm at Federal Level

Overall, the main differences between federal and Maine gun laws are on who can and cannot carry firearms. Federal firearms laws are enacted under the Gun Control Act of 1968 and state that the following individuals are not eligible to possess firearms:

Individuals Prohibited from Owning a Firearm in Maine

Maine has its own list of individuals who are prohibited from owning a gun and the list differs in a few areas from the Federal firearms law.

No person who has been convicted of a crime that is punishable by one or more years can own a firearm. This rule includes juvenile offenders.

A felon can apply for a permit to carry a gun five years after being discharged from prison or probation. But they cannot be given a concealed carry permit.

Regardless of how non-restrictive the Maine gun laws are compared to the federal level, individuals are not exempted from the federal laws just because they differ from state laws.

It is usually up to the discretion of local law enforcement to decide whether they will enforce state or federal firearm laws. The penalties for violating federal and Maine laws are severe including hefty fines and up to life in prison.

Both federal and Maine Firearm laws require all persons to undergo a background when purchasing a firearm from a licensed dealer. The Federal Bureau of Investigations (FBI) contains a database that processes all gun requests through the National Instant Criminal Background Check System (NICS).

However, both Maine and Federal firearm laws do not require a background check on the private transfer of firearms between individuals.

Federal and State Registration of Firearms

No law is in place that requires firearms registration at both federal and state level in Maine.

Both Maine and National Firearms Act prohibit the carrying of machine guns and armor-piercing ammunition without authorization.

Waiting Period to Purchase a Firearm

Maine does not have a waiting period to purchase a firearm.

Federal firearm laws do not cover the issuance of concealed handgun permit as these have been left up to the individual states to determine how permits of sanctions will be required for open or concealed carry handguns.

“An Act to Authorize the Carrying of Concealed Handguns without a Permit” was initiated in Maine on October 15, 2015 that allows any person who is not otherwise prohibited from possessing a firearm to legally carry a concealed handgun without a permit in Maine.

The law further states that an individual can own a loaded gun (pistol or revolver) while in a motor vehicle, trailer, or vehicle being hauled by another motor vehicle.

However, to perform concealed carry in Maine, the individual must be at least 21 years old. There are exceptions for members of military who are on active duty in any branch of the armed Forces of the United States or National Guard to be at least 18 years old.

This exception includes anyone who has been honorably discharged from the Armed Forces or National Guard, who is not prohibited from carrying a concealed firearm.

Any person between 18 to 20 years old without any referenced military qualifications must have a concealed carry permit to carry in Maine. This law applies to both residents and non-residents in Maine. In terms of reciprocity, Maine recognizes the right of individuals carry a concealed firearm with a valid permit from the following states:

Where Are Guns Prohibited in Maine?

Though Maine Gun Laws allow a person to carry a concealed firearm in Maine, the law does not change where the person may possess the gun. It is still illegal to carry any firearm in the following locations:

Certain state parks allow a person to carry a gun within the park’s borders during deer hunting and archery season provided the person has a valid Maine permit to carry in Maine.

Any individuals with a concealed handgun must immediately inform law enforcement officers that they have a firearm during a traffic stop, detention, or arrest.

Maine Law states that you may not “display in a threatening manner a firearm, slungshot, knuckles, bowie knife, dirk, stiletto, or other dangerous or deadly weapon usually employed in the attack on or defense of a person.” Anyone foudn violating that law can be charged with either a federal or state offense.

The process of determining whether the individual will be prosecuted with federal, state, or both offenses is a complicated area of the law that’s typically guided by state and federal prosecutorial policies.

If the person is found to be in possession of a firearm illegally, the person will face felony-level penalties with at least a maximum imprisonment of 10 years. Anyoen with three or more convictions of violent crimes will face a mandatory minimum term of imprisonment of no less than 15 years.

The crime of violence includes:

Do I have a duty to notify a police officer that I carry concealed handguns in Maine?

Is my Maine driver’s license linked to the carry permit?

No, your Maine driver’s license is not linked to the carry permit unless it is requested by the permit holder.

Are “No Weapons Allowed” signs enforceable in Maine?

Yes, a person is found to be guilty of criminal trespass if they enter such locations with a firearm, regardless of whether it’s open carry or concealed.

Does Maine have a red flag law?

No, Maine does not have a red flag law or any Extreme Risk Protection Order (ERPO) laws.

The applicant for a permit in Maine must:

Processing Time: 30 days for a resident of 5 or more years and 60 days for non-residents or residents of less than 5 years.

Step 3: Mail your completed application to the state police or hand it to your local police station with the following documents: