What you need to know about Michigan Gun laws in 2022 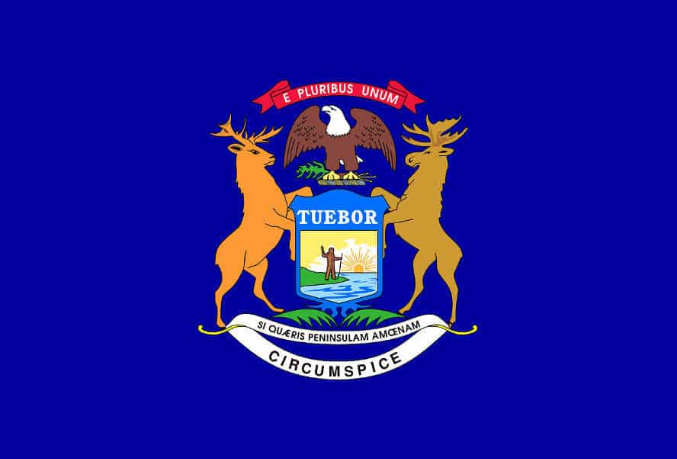 At the local level, Michigan’s gun restrictions are based on a “Shall Issue” policy. To buy a handgun privately, you’ll need a purchase permission, background checks, and firearm registration.

Handguns can only be purchased by residents, whereas long guns can be purchased by non-residents. A state-approved weapons training course is required for concealed carry permit. Non-residents who are in the military, hold a Michigan driver’s license, or are registered to vote in Michigan are eligible for exemptions.

It is allowed to carry a handgun in public in Michigan as long as the individual is carrying the firearm with legitimate purpose and the firearm is not hidden. There is no law that indicates that openly carrying a concealed pistol is legal.

It is lawful since there is no statute prohibiting it in Michigan; but, Michigan law restricts where a person may carry a handgun.

Places Where It Is Illegal to Carry a Firearm

Possessing a firearm on the premises of a depository financial institution (e.g., bank or credit union), a church or other place of religious worship, a court, a theater, a sports arena, a day care center, a hospital, or an establishment licensed under the Liquor Control Code is a 90-day misdemeanor, according to MCL 750.234d.

Exceptions and the Open Carry Laws

The owner or a person hired as security (if the firearm is possessed for the purpose of providing security), a peace officer, a person with a valid concealed pistol license (CPL) issued by any state (may carry a non concealed pistol), or a person who possesses one of the above listed premises with the permission of the owner or owner’s agent are exempt from the provisions of this section.

Officers must be aware of the aforementioned exception for legal CPL holders, since many persons who openly carry weapons do so. In the above-mentioned locations, a person with a valid CPL may carry a non concealed firearm.

The law does not require a CPL holder to carry a concealed pistol. A CPL holder has the option of carrying a firearm secretly or openly.

Furthermore, regardless of whether a person holds a CPL, a private property owner has the authority to restrict anyone from carrying guns on his or her land, whether hidden or otherwise. If someone remains on the property after the owner has instructed them to leave, they may be prosecuted with trespassing (MCL 750.552).

Carrying a hazardous weapon, including a firearm, with the purpose to use it unlawfully against another person is likewise a crime, according to MCL 750.226. Furthermore, MCL 750.234f addresses a minor’s ownership of guns in public.

A person who knowingly brandishes a handgun in public is guilty of a 90-day misdemeanor under MCL 750.234e. Brandishing is not defined in Michigan law, and no Michigan cases have been published that define the word.

Opinion No. 7101 of the Attorney General gives instructions and states, “A person when carrying a handgun in a holster in plain view is not waving or displaying the firearm in a threatening manner. Thus, such conduct does not constitute brandishing a firearm….”

The transport of guns in a vehicle is governed by Michigan law. MCL 750.227c and MCL 750.227d deal with guns other than pistols being transported in vehicles. It is a criminal to transport a firearm anywhere in a vehicle unless the individual is licensed to carry a concealed pistol, according to MCL 750.227(2).

This information is offered solely for educational reasons. Before implementing the information in this update, officers should seek clarification from their local prosecutor. Page 2 of 3 of MSP Legal Update No. 86 MCL 750.231a contains exceptions to the aforesaid legislation.

One exemption enables handguns to be transported in a vehicle for a “lawful reason.”

Going to or from a hunting or target area, a place of repair, moving goods from one home or business to another, a law enforcement agency (for a safety inspection or to turn the pistol over to the agency), a gun show or place of sale or purchase, a public shooting facility, public land where shooting is legal, or a private property where a pistol may be lawfully used are all examples of lawful purposes.

A pistol transported for a “lawful purpose” by a person not permitted to carry a concealed pistol must be empty, in a closed container meant for guns, and in the trunk, according to MCL 750.231a (or if the vehicle has no trunk, it must not be readily accessible to the occupants).

In a vehicle, there is no way to “open carry” a firearm. A person who transfers a handgun in a vehicle to an area where he or she intends to “open carry” without a CPL or who is otherwise exempted (e.g., a police officer) may be in violation of MCL 750.227.

Carrying a hidden weapon means concealing a handgun beneath a coat. O-3158, Op. Atty. Gen., 1945. A firearm is concealed, according to the Court of Appeals in People v. Reynolds, if it is not seen by individuals casually viewing the suspect in the regular course and normal connections of life. 159 Mich. App. 38 (1970).

A person may not acquire, carry, own, or transport a firearm in Michigan without first obtaining a License to Purchase and registering the pistol, according to MCL 28.422. Certain exemptions are included in the Act, and further exemptions may be found in MCL 28.422a and MCL 28.432.

A person having a valid Michigan CPL is exempt from obtaining a License to Purchase, but he or she must still register the firearm after purchasing or otherwise acquiring it using a Pistol Sales Record (MCL 28.422a).

A state civil infraction is a violation. A person with a valid CPL can also carry, own, use, or transfer another person’s fully registered weapon (MCL 28.432).

For the first 30 days after purchasing a pistol, customers must have their copy of the License to Purchase or Firearm Sales Record with them when carrying, using, owning, or transporting the pistol.

Registration Certificates or Green Cards are the most popular names for these documents. Officers are reminded that having either record in their custody or keeping either record is not required after 30 days.

A person with a valid CPL may not carry a concealed pistol in a pistol-free zone, according to MCL 28.425o. A state civil infraction is the first offense.

The following is a list of the premises covered by the Act (excluding parking lots): Except for a parent or legal guardian dropping off or picking up a kid and keeping the weapon in the vehicle, a public or private day care facility, a sports arena or stadium, and a bar or tavern where the principal source of income is the sale and consumption of liquor by the glass (does not apply to owner or employee of the business).

Unless authorized by the presiding official, any property or facility owned or operated by a church, synagogue, mosque, temple, or other place of worship, an entertainment facility with a seating capacity of 2,500 or more, a hospital, a dormitory or classroom of a community college, college, or university, and a casino (R 432.1212, MCL 432.202) are also included in the statute.

Note that the following law only applies to CPL holders who carry a firearm. The legislation does not apply if the CPL holder is carrying a non-concealed firearm.

As previously stated, those possessing a valid CPL are exempt from the prohibited premises enumerated in MCL 750.234d. As a result, someone with a valid CPL can carry a non-concealed weapon. This information is offered solely for educational reasons.

Furthermore, the above-mentioned pistol-free zones for CPL holders do not apply to the following individuals when they are licensed to carry a concealed firearm: retired police officers, persons employed or contracted by a listed entity to provide security where carrying a concealed pistol is a term of employment, licensed private detectives or investigators, sheriff’s department corrections officers, state police motor carrier officers or capital security officers, and me.

A non-possession resident’s property in Michigan does not entitle them to own a firearm in the state.

MCL 750.231a makes it permissible for a non-resident of Michigan to carry a concealed firearm in Michigan if he or she has a valid CPL granted by his or her home state, as long as the firearm is carried in accordance with the license’s conditions.

Out-of-state CPL holders are subject to Michigan statutes that apply to Michigan CPL holders. Because many states offer CPLs to out-of-state residents, authorities should make sure the person genuinely lives in the state where the license was granted.

The CPL is not recognized in Michigan if the individual does not live in the state that granted it, and the person may not carry a concealed weapon in Michigan.

Possession of Pistols by Non-Residents

Non-residents of Michigan who hold valid CPLs issued by another state are allowed to possess a non concealed pistol in Michigan without having to comply with Michigan’s pistol registration regulations under MCL 28.432.

MCL 28.422 also exempts citizens of other states from Michigan’s handgun registration requirements, enabling them to possess a pistol in Michigan provided all of the following conditions are met: The person is licensed to buy, transport, or carry a pistol in his or her home state, has the license while in Michigan, owns the pistol while in Michigan, has the pistol for a lawful purpose as defined in MCL 750.231a, and is in Michigan for less than 180 days with no intention of establishing residency.

On demand, a non-resident must provide the license granted by his or her home state to a police officer.

Failure to do so is a misdemeanor punishable by 90 days in prison. Non-residents must comply with MCL 750.231a (described above in the Transporting Firearms section) while transporting a handgun in Michigan, unless they have a concealed pistol license granted by their state of residency.

The Fourth Amendment protects civilians against unwarranted searches and seizures, officers are told. It is typically allowed to carry a non-concealed weapon. Officers may engage in a consensual interaction with a person carrying a non-concealed weapon; but, officers must have reasonable suspicion that criminal activity is occurring in order to stop a citizen.

Officers, for example, may not stop a person just because they are carrying an unlicensed firearm. To suspect the individual is carrying an unregistered firearm, officers must have information that rises to the level of reasonable suspicion.

Officers are also reminded that citizens are not required to identify themselves to a police officer unless they are being stopped for a violation of the Michigan Vehicle Code. 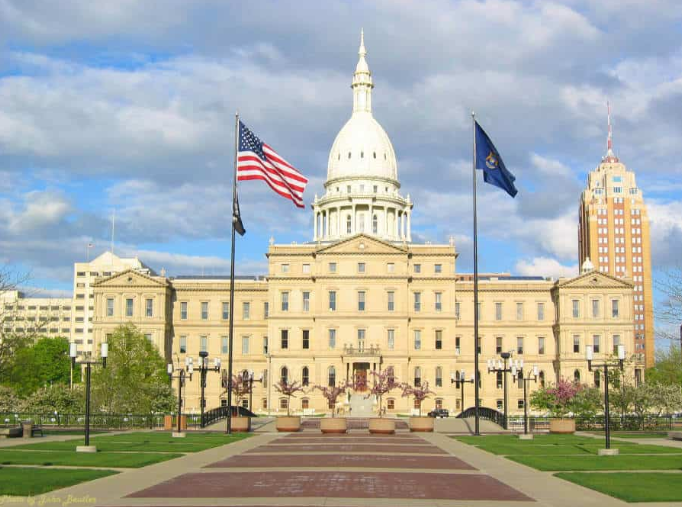 MCL 28.425.0, which provides that with authorization, you can conceal carry:

You may openly carry in the off-limits zones if you have a valid Michigan CPL. Multiple state agencies have weighed in on the issue, despite the lack of conclusive case law.

However, a simple reading of section 5o(1) of the Concealed Pistol Licensing Act reveals that it simply prohibits the carrying of “concealed” firearms. A holstered handgun carried openly and in clear view is not considered “concealed,” and so does not violate the section’s ban.

In 28.425 – Permit applications, an individual must apply to the county clerk in the county where they reside to receive a license to carry a concealed firearm. For Initial or Renewal, each applicant must pay a $115.00 application and license fee.

During normal business hours, county clerks will distribute concealed pistol application kits free of charge to those who desire to apply for concealed firearm licenses.