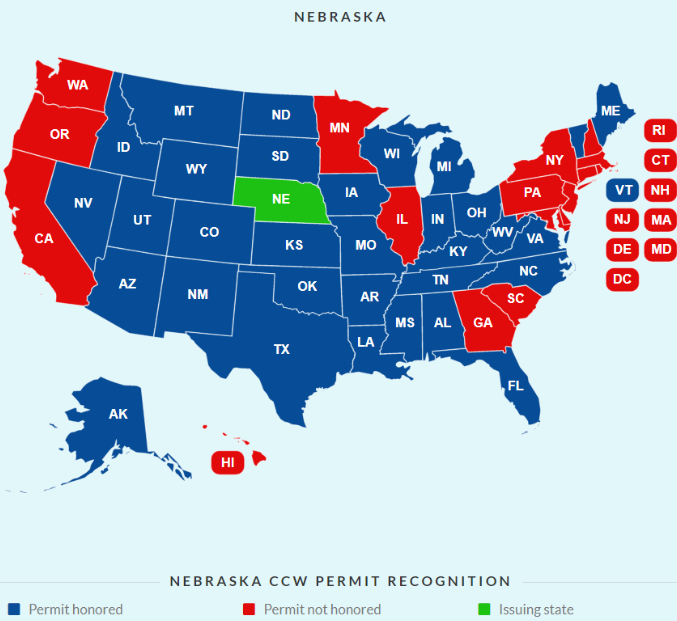 Details will be stated below.

Information on Permits For Nebraska

Nebraska’s firearms laws designate it as a “Shall Issue” state. Permits are only available to residents and are issued by the State Patrol Department at the state level. Military personnel stationed in Nebraska are granted exemptions and are classified as residents.

Applicants must be at least 21 years old and have completed a weapons safety course. Notarization is required on the application form.

For districts and territories, Nebraska honors permits from the District of Columbia.

Nebraska is a “shall issue” state, and the permit is for residents only and is valid for 5 years.

Applicants must be at least 21 years old and also a resident of Nebraska for the last 180 days.

Applicants need to pass an approved firearms training course as well as complete a vision test. Applicants must be a citizen of the United States and have never had a conviction for violation of any law relating to firearms, unlawful use of a weapon, or controlled substances in Nebraska or any other jurisdiction in the past ten (10) years.

Steps to get a permit

Get a vision exam if you don’t have a driver’s license. A driver’s license verifies that you have had your vision examined and passed. After that, you must finish a weapons training course and then fill out and have notarized the application, which you can find under the FORMS tab or pick up from Troop Headquarters.

Aside from that, you’ll need the following documents: Proof of training, evidence of vision – drivers license, proof of citizenship – birth certificate or passport, and proof of address – driver’s license or Nebraska ID card are all required documents.

After that, you can present the application and all of the necessary documents to the Troop Headquarters nearest you. Your fingerprints will be captured, as well as your signature and picture. Finally, if your application is approved, you will get a notification by mail.

Where you can carry

State parks, state and national forests, road side rest areas, vehicle, and basically all areas of the state – except those listed down below.

Where you cannot carry

Police, Sheriff, or Nebraska State Patrol station or office, detention facility, prison, or jail, courtroom or building which contains a courtroom, polling place during a bona fide election, meeting of the governing body of a county, public school district, municipality, or other political subdivision, meeting of the Legislature or a Committee of the Legislature, financial Institution, professional or semi professional athletic event, building, grounds, vehicle, or sponsored activity or athletic event of any public, private, denominational, or parochial elementary, vocational, or secondary school, a private post secondary career school, a community college, or a public or private college, junior college, or university, place of worship, hospital, emergency room, or trauma center, political rally or fundraiser, establishment having a license issued under the Nebraska Liquor Control Act that derives over one half of its total income from the sale of alcoholic liquor, place where the possession or carrying of a firearm is prohibited by state or federal law, place or premises where the person, persons, entity, or entities in control of the property or employer in control of the property has prohibited permit holders from carrying concealed handguns into or onto the place or premises, into or onto any other place or premises where handguns are prohibited by state law.

Who issues a permit?

The application for a concealed carry permit or license must be handled within five days of receipt.

Is it a must to notify a law enforcement officer?

When carrying a handgun, you must also have your permit and driver’s license with you in case you bumped into law enforcement officers.

Yes. Nebraska’s firearms regulations make “No Weapons” signs legally binding. Entering a private property or company that has displayed these notices with a concealed handgun has legal consequences.

Regardless of whether the law allows or prohibits signage, we advise avoiding entering a property with a “No Weapons” sign. If you refuse to leave a property after being ordered to do so, you are breaching the law and risk being prosecuted.

Yes, you may drive with a loaded pistol in your vehicle provided it is visible. To carry a concealed handgun inside or outside a vehicle, you must have a permit.

In Nebraska, open carry is legal. Local governments, on the other hand, have the authority to enact their own restrictions, so you should verify the local laws in your region. The age requirement for open carry is 18.

If you may carry in a restaurant that offers alcohol, the answer is “Yes” or “No.” Some restaurants may have “NO GUN” signs displayed. Check with the staff to see whether this just applies to the bar. If we answered “Yes,” then eating a meal without drinking alcohol should be legal.

What are the federal prohibited carry areas (even with a permit)?

There is no Federal Law that prohibits carry in National Forests. States control the carrying of firearms in National Forests in their state, Federal Prisons, U.S. Army Corps of Engineers – The Corps builds and runs flood control and navigation Dams. The Corps has jurisdiction over the Dam Site and usually all waters backed up by the dam. Carry anywhere on Corps property is illegal.

Some have shooting clubs. You can take firearms onto the Base to shoot if allowed by the base. Certain rules/regulations must be met before bringing firearms onto a Military Compound.

Check at each Military Post for specific rules on Shooting Clubs, Rented Offices, Any part of any building that the Federal Government has rented for Office space or work force etc. Just their offices or the part of the building they have control over.

You can carry in the rest of the building if state or local laws allow. Amtrak will have a system in place to check firearms/Ammo in (Amtrak Firearms Policy), Post Office – Postal regulations prohibit the possession of firearms in their buildings and in their parking lots or any property they own, Bureau of Land Management – If you can legally carry in the state the BLM land is in you can carry on the BLM land.

If it is not legal the area will be posted as no firearms allowed. Any building on the BLM land operated by the federal government is considered federal property and carrying in those buildings is not allowed, Indian Reservations – Carry on Indian property is controlled by Tribal Law.

You must check with each tribe before carrying on their property. Some Indian Tribes consider federal and state highways through their property as under their control.