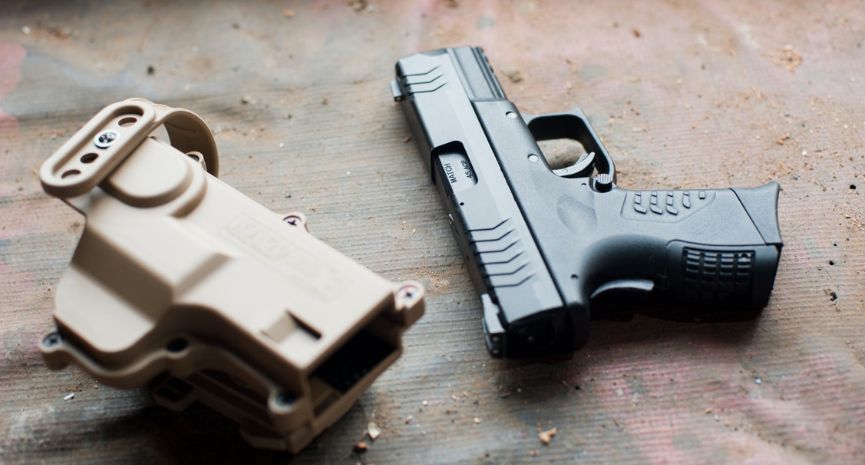 States gun laws restrict the sale, ownership and use of firearms, and they vary from state to state. New Mexico is a “shall issue” state with a concealed carry license that’s issued to residents only.

The New Mexico gun laws are fairly liberal compared to other states as it allows a person from another state to transfer their handgun license into a New Mexico license provided the conceal carry laws in the other state are similar to New Mexico’s.

A license is required for concealed carry whereas open carry is legal without a carry license.

The shall-issue New Mexico state issues concealed weapons licenses at the state level by the Department of Public Safety. The state does not require any permit or firearms registration when purchasing a handgun from a private individual.

New Mexico allows open carry of firearms without a license for anyone 19 years old and above who is permitted to possess a firearm legally. Despite that, the state does have a few off-limit areas where you’re not allowed to carry a gun with or without a permit, including tribal land and places that sell hard liquor.

Concealed Handgun License (CHL) is required for residents to carry a concealed weapon. Non-residents can also practice concealed carry provided that they have a valid permit from a state that New Mexico honours.

The CHL limits the number of concealed guns on a person to one at any given time as well as the category and caliber permitted. In order to get the permit, the applicant must be 21 years old and above and have undergone a 15-hour handgun safety course with live-fire instruction included.

There’s no specific statute in New Mexico establishing it as a Castle Doctrine, but a 1946 state supreme court ruling in State v. Couch stated that “A person who is threatened with an attack need not retreat. In the exercise of his [or her] right of self-defense, he [or she] may stand [one’s] ground and defend himself [or herself].”

According to the New Mexico law, the use of deadly force is justifiable when committed in any of the following cases:

When committed to lawfully attempting to apprehend a person for a felony, suppressing any riot or keeping and preserving the peace.

The person who uses deadly force in self-defense must prove that he or she was placed in reasonable fear of immediate death or great bodily harm, has used a reasonable amount of force to avoid the threat, and has not been the one to instigate the encounter.

No, New Mexico does not allow constitutional carry of handguns.

Am I permitted to open carry in New Mexico?

Yes, any person who is 19 years old and above can legally keep and bear arms in New Mexico.

What is the minimum age to get a concealed loaded firearm license?

The minimum age to practice concealed carry is 21 years old in New Mexico.

Is it legal to own a taser or stun gun in New Mexico?

Yes, it is legal to purchase and own stun guns and tasers without a license in New Mexico.

Does New Mexico have restrictions on handgun magazine capacity?

No, New Mexico does not have handgun magazine capacity restrictions.

Does New Mexico have restrictions on ammunition?

No, New Mexico does not have restrictions on ammunition.

Can I carry a concealed handgun in a vehicle?

Yes, you can conceal carry a handgun in your vehicle without a license if you’re at least 19 years old and above.

Can I carry a concealed firearm at roadside rest areas?

Yes, you can conceal carry a firearm at roadside rest areas with a New Mexico Concealed Handgun License or valid permit.

Yes, you can conceal carry a handgun in state/national parks and forests with a concealed pistol license. However, you cannot carry to Wildlife Management Areas.

Can I carry concealed firearm in bars and restaurants that serve alcohol?

Yes, you may conceal carry in restaurants licensed to sell only beer and wine that derive no less than 60% of their annual gross receipts from sale of food with a New Mexico CHL. Firearm carry is not permitted in bars or restaurants that serve hard liquor.

Can I carry or possess a handgun on hotel property?

A home and business owner has the legal right to forbid firearms on their property and/or buildings with appropriate signage displayed stating such prohibition.

Do I have a duty to inform a police officer that I’m conceal carrying a firearm?

No, New Mexico does not impose a duty to inform a law enforcement agency that you’re carrying a concealed firearm.

Is the New Mexico carry license linked to a driver’s license?

Are “No Weapons Allowed” signs enforced in New Mexico?

Yes, the state enforces “no weapons allowed” signs. A licensee may not carry a concealed handgun on or about them on private property with signs prohibiting the carry of concealed weapons posted.

Does New Mexico have pre-emption laws related to concealed carry?

Does New Mexico have a red flag law?

Yes, New Mexico has a red flag law that took effect in May 2020 that allows law enforcement officers to file a petition ordering the respondent to surrender all firearms they control, own, or possess.

No, New Mexico state law does not define brandishing. However, it is illegal to endanger the safety of another by handling or using a firearm or other deadly weapon in a negligent manner.

Does New Mexico have laws regarding conceal carry while using alcohol or drugs?

Yes, New York does not allow conceal carry while consuming alcohol or while the person is impaired by the use of alcohol, controlled substances, or over-the-counter or prescribed medications.

The applicant for a New Mexico carry license must:

Step 1: A handgun license can be renewed 60 days before or after the expiry date.

Step 4: Complete the application and prepare the following documents

Concealed handgun permit applicants are required to complete an approved firearms safety training course for the category and largest caliber of handgun that the applicant is applying a license for.

The New Mexico Dept of Public Safety (DPS) prepares and publishes the minimum standards required for the training course, including classroom instruction, range instruction and an actual demonstration by the applicant with a .32 caliber handgun.

The training course must be more than 15 hours in length and must provide the following instruction:

Places you can carry a concealed firearm

Other States’ Reciprocity With New Mexico