Who is the star of “I Am Forever” TV Show? 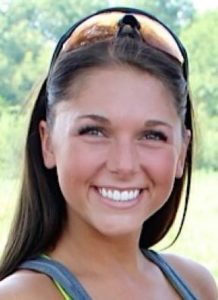 Reagan Tyler, a teen athlete, was not an accomplished shooter to begin with, but that is quickly changing. What happens when you take a young person with potential and determination and introduce them to the best trainers in the world? This is the concept of NRA Freestyle’s thrilling new season, I Am Forever, sponsored by FNH USA. With former Green Beret John Wayne Walding handling the guns and acclaimed fitness coach Isaiah Truyman handling all other facets of athletic success, we have the rare opportunity to see a beginner becoming an expert shooter in an astonishingly short period of time.

Reagan took the time between high school and her rigorous training schedule to address our questions about her upcoming performance.

“The subject matter of this show was a lot of uncharted territory for you. What drew you to appear on I Am Forever, which is sponsored by FNH USA?”

Reagan Tyler: Uncharted terrain is simply a new challenge for me. I Am Forever, sponsored by FNH USA, has been really difficult overall, but what really sold me on being on the show was the amount of new things I can learn, such as how to shoot various types of weapons and use different skills to make myself a better shooter. You can spend a lot of time at the gym or range and not really change much, so I jumped at the chance to learn from the pros. I’ve always been athletic, so it was a pleasure to be able to learn from some of the best coaches and shooters in the world!

“What is your sporting background?”

RT: When I was younger, I used to play softball and then ride horses (equestrian hunter/jumper). I love being a part of a team, so when I was eleven, I signed up for volleyball and qualified to play on a traveling competitive team. I became enamored with the sport and haven’t stopped playing in seven years. My team traveled around the country and competed in the USAV National Championships for many years, earning a bronze medal in third place when we were 15 years old. I have played volleyball in high school, and we just won the 6A State Championship – a fantastic way to cap off my senior year! Aside from volleyball, I enjoy extreme sports like riding dirt bikes and four wheelers, wakeboarding at the pool, and snowboarding. I love going to the gym, and I’ve discovered that training in combatives is a great way to challenge myself.

“Without giving too much away from the broadcast, do you have any good examples of how Isaiah Truyman’s athletic coaching has benefited you as a shooter? (Or how practicing with John Wayne Walding has improved your athletic performance?)”

RT: Isaiah is an incredible motivator and mentor. He has really encouraged me to try new sports to cross train for shooting weapons, and he has really helped me become an overall better athlete. Prior to the show, I had some experience with guns, but it was only for recreational purposes. It’s fascinating to see how even minor improvements in the specifics of a workout can directly translate into better shooting. I now understand how various sports, such as concentration, breathing, and running mechanics, can all play a significant role in being a great shooter-athlete. I’ve also grown to appreciate shooting a wide range of weapons. It is difficult to find an activity that is both exciting and potentially life-saving.

I owe so much to John Wayne Walding! Simply being in his presence motivates me to do my best. I can’t tell you how amazing it is to learn from one of the best shooters in the country and a real American hero! He has educated me on all of the weapons platforms, but it is incredible how what he teaches – what he tells, the essential principles he has me study – can be applied to fitness or almost everything else in life! He has really been there and done that; his attention is always on what is necessary and what he knows from firsthand experience will work with each shooter and in each situation. Throughout every shooting challenge and drill, he has been by my side.

“The show premieres in March, but as the host, you’ve been involved on social media and even posed for a 5.11 photo shoot. How does it feel to spend so much of your time in the spotlight?”

I’m not sure it’s all hit home yet. I don’t feel like I’m living my life in public right now. I had a great time working on the 5.11 photo shoot and enjoy wearing their clothes to the range and when working out. This collection is designed specifically for shooter-athletes! It was exciting to see the final images on the Internet.

Since social media is becoming so mainstream in general, I find myself posting on Instagram, Twitter, and Facebook on a weekly basis. This might change as the episodes are published. So far, I’ve found that the firearms community is a wonderful group of people who encourage and support one another, and it’ll be interesting to see how common athletic shooting really is. I believe it adds a new dimension to the game and will potentially draw a large number of new shooters. Shooting as a sport is enjoyable, involving concentration and accuracy, and it complements becoming an athlete. Being in the public eye is really the whole point of the program: to show my progress in the sport and inspire fans of all ages and athletic abilities to get out and try something different – even exercise with me each week.

“What other aspects has this experience impacted your life? Are there any key moments in the show that we can watch out for?”

That’s incredible! Not only has the show influenced my life, but so have the people I’ve met. Almost every aspect of this project has changed my life. When it comes to improving my shooting, I’ve discovered that practicing properly pays off big time.

Reagan’s word for everyone

In terms of turning points, in one episode I was asked to run a long distance before focusing intently on making long-distance shots with a bolt gun – it was a very eye-opening experience. So much concentration is needed to calm yourself while your heart is racing, to not become angry, to adapt and find a way to make the shot. That is true life, and it was one of the “aha!” moments and turning points in my life. In those times, it’s just you and what’s on the other side of the scope; you’re totally immersed in your own universe, and it seems as if the world stops spinning for a moment while you do your thing. We athletes live for those moments as athletes.