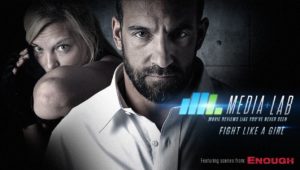 If you’re interested in checking out the newest video projects from the NRA, then we’d like to recommend the websites below: NRA Freestyle TV (featuring content from Daniel Defense) and NRA Life of Duty (featuring content from Brownells). DefenseReview (DR) friend Dom Raso has a really interesting web TV series on the NRA Freestyle site called the Media Lab, where Raso does lots of interesting stuff, including breakdowns of various fight scenes from movies. These analyses include sections on the tactics used in the fight scenes. It’s likely that when you’re in a life-or-death fight, the last thing you want to be using your hands for is hand-to-hand combat. It’s an important and necessary skill to have in any martial education, and Raso is a good teacher. While we’re on the subject, Raso’s observations about action heroes ditching their guns after each kill is correct and quite amusing. This is what the CliffsNotes version of it is: Don’t ever throw your gun away. He also did a combatives demonstration with a discussion of the Keysi Fighting Method, in which he participated in a fight scene with character Jack Reacher.

Additionally, in the latest episode of the NRA Freestyle TV Media Lab, Episode 7 is entitled “There’s Always a Way.” This tincture has some godly stuff in it, and may prove useful if you find yourself in a dangerous situation in the streets. Raso, by the way, is a retired US Military Special Operations Forces (SOF) assaulter and operator, which means he brings a lot of professional experience and wisdom to the table. DR recommends you view all of the NRA Freestyle Media Lab episodes that you have access to when you have time, as they are definitely worth watching.

The NRA’s online channel, LOD’s TV series Defending Our America, produced by SIG SAUER, is nicely done, interesting, and very entertaining as well, so I definitely suggest you watch it. Defending Our America, a documentary on the Second Amendment, is now available on the Sportsman Channel. “Episode 8: We’re Not Ready” is astounding, and you’re definitely going to want to see it. In the section which details a simulated active-shooter simulation taking place at a school, if you want a good scare, you should pay attention to the beginning of the video.

The “Call of Duty”

In addition to publishing an incredible D-Day D-Day Frontlines report titled Normandy: A Hero Returns, which was presented by FNH USA and hosted and commented on by Oliver North, NRA Life of Duty TV has also put out a terrific World War II D-Day Frontlines Report tribute video, which is entitled Normandy: A Hero Returns and was hosted and commented on by Colonel North. Defense Review believes this video is required viewing for our readers, and for anyone who is interested in World War II, as well as anyone who cares about freedom and liberty. The video as a whole is great, but DR especially enjoyed the video graphic of the Germans’ Normandy beach fortification system comprised of mines, barbed wire, machine gun and artillery cannon “pill boxes,” as well as various other explosives. it is moving and poignant to see an old woman whom he liberated when he was 11 years old meet up with him at the liberated town of Sainte-Mere-Eglise; it is also interesting to see Private John Perozzi, a 94-year-old WWII veteran and American hero, return to Normandy because it is his first time there since his visit following the liberation of the town from the Nazis (and all of France). To be able to experience something like that, to see something like that, is amazing. There is also a video which demonstrates the fact that although the French can be cast as one-dimensional characters in many films, it is impossible to deny that some French people truly love America and Americans, and you can certainly find a multitude of them in Normandy.

The NRA Freestyle series is terrific, and it’s even better if you happen to be someone who can’t help but bitch about the things you see on the big screen. You put your favorite shows to the test at the Media Lab. In this episode, Dom Raso interviews Tony Blauer (the developer of the S.P.E.A.R. system) to learn about how a scene from The Bourne Identity and Saving Private Ryan were edited together.

Because of his twelve years as a Navy SEAL, Dom Raso receives tons of questions about television shows and movies, and what is and is not realistic. However, he is the first to state that his opinion does not have much value unless evidence is provided to support it. Please make yourself at home in the Media Lab.

A thrilling action film, particularly if you’re a fan of movies with realistic, visceral fighting scenes. New NRA Freestyle has only been online for a short time, so be sure to take advantage of this opportunity to check it out!

In order to introduce clips from Season 1, Raso and the #MediaLab team are unveiling clips from that season. Come watch and let us know what movies you think they’re reviewing.

Fight scenes in which characters fight using only guns and improvised weapons are commonplace, but could such a thing actually happen in real life?

DR seems pleased with what we’ve seen, so we should continue doing what we’re doing.