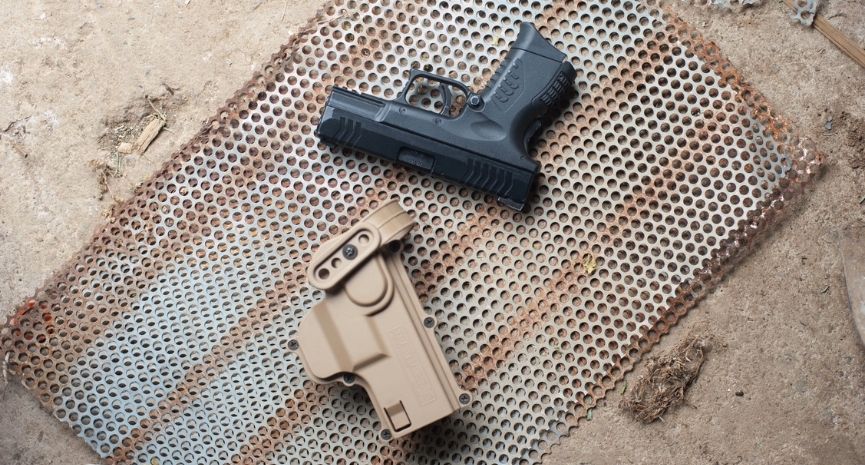 The rules and regulations surrounding firearms is in part based on federal laws, but a lot of it is left to each individual state.

Among the neighboring states, Pennsylvania has relatively more relaxed gun laws. Pennsylvania is a “shall-issue” state that issues concealed weapons licenses at county level by the sheriff’s office or chief of police in the city.

The rules and regulations surrounding firearms is in part based on federal laws, but a lot of it is left to each individual state. Among the neighboring states, Pennsylvania has relatively more relaxed gun laws. Pennsylvania is a “shall-issue” state that issues concealed weapons licenses at county level by the sheriff’s office or chief of police in the city.

Pennsylvania does not require its residents to obtain a permit when purchasing firearms. Although the state does not have a comprehensive firearms registration system, the Pennsylvania state police still maintain a database of all handgun buyers.

Private party transfers of handguns must be conducted through a licensed dealer or at a county sheriff’s office and the individual must go through a background check. However, these requirements are not applicable in the transfer of firearms between spouses, parents and children, or grandparents and grandchildren.

Pennsylvania permits open carry of handguns for residents 18 years old and above who are legally allowed to possess a firearm. Conceal carry is only legal with a lawfully issued License to Carry Firearms (LCF) or a permit/license from a state that Pennsylvania honours for non-residents.

Unlike many other states, Pennsylvania does not require its applicants to go through firearms training when obtaining a carry license.

Pennsylvania is a Castle Doctrine state with a stand your ground statute. The state does not require its residents to retreat to a place where they have the lawful right to be, and they can meet force with force when confronted with a deadly weapon.

According to Pennsylvania law, the use of force against another is justifiable if the person acted in self-defense and reasonably believes that the use of such force is necessary for the purpose of protecting him or herself against unlawful force by another.

The Use of Force for Property Protection

Pennsylvania permits the use of force when the person reasonably believes that such force is immediately necessary to prevent or terminate unlawful entry to a land or tangible movable property.

The Use of Force for Self-Protection

Use of force is justifiable when the person believes that such force is necessary to protect him/herself or another against the use of unlawful force.

Deadly force is only justifiable when the person reasonably believes that it is necessary to protect him/herself or another against imminent death, serious bodily injury, kidnapping, or sexual assault. However, that cannot be said if the person knows that they can safely retreat without using such force or if he/she was the initial aggressor.

The person is presumed to have a reasonable belief that deadly force is necessary to protect him/herself against death, serious bodily injury, kidnapping, or sexual assault under the following conditions:

No, the state of Pennsylvania does not allow constitutional carry by residents and non-residents.

Yes, Pennsylvania permits open carry of firearms without a license provided that the person is at least 18 years old and is legally entitled to possess a firearm.

However, it is worth noting that a Pennsylvania Supreme Court ruling in Commonwealth of Pennsylvania v. Darren Montgomery, 234 A.3d 523 (PA 2020) has created some uncertainty about the definition of open carry when the court ruled that a visible firearm is sometimes considered as a concealed firearm.

Does Pennsylvania allow conceal carry weapons other than handguns?

The barrel length is determined from the muzzle of the barrel to the face of the closed action, bolt or cylinder.

Are we allowed to own a taser or stun gun in Pennsylvania?

Yes, stun guns and tasers are legal in Pennsylvania without a valid license/permit for anyone legally entitled to carry a firearm.

Does Pennsylvania have restrictions on magazine capacity for handguns?

No, Pennsylvania does not have restrictions on handgun magazine capacity.

Does Pennsylvania have restrictions on ammunition?

Yes, it is illegal for any person to possess KTW Teflon-coated bullets or other armor-piercing ammunition.

Does Pennsylvania impose a duty to inform a police officer that you’re carrying a concealed handgun?

No. Pennsylvania does not impose a duty to inform police officers that you’re carrying a concealed handgun unless asked.

Is The Pennsylvania carry license linked to a driver’s license?

Does Pennsylvania have pre-emption laws related to firearm concealed carry?

Yes, Pennsylvania reserves the authority to regulate firearms, except for local municipalities where they may regulate the discharge of firearms within cities boundaries.

Does Pennsylvania have a red flag law?

No. Pennsylvania does not have a red flag law.

Purchase and Possession of Handgun

Is a purchase permit required when buying a handgun in Pennsylvania?

No, Pennsylvania does not require a permit for a handgun purchase.

Are background checks required for purchasing a firearm?

No, background checks are not required for firearm purchase.

Do handguns need to be registered in Pennsylvania?

No, Pennsylvania does not require handgun registration.

Areas where Firearms are Permitted

The applicant for the valid license must:

Step 1: Download the application or head to your local county sheriff’s office.

Step 2: Complete the application and include the following:

Step 1: Renewals can be accepted 60 days in advance of your valid license expiring. The applicant with expired licenses of more than 60 days will be considered as new applicants.

How Does Pennsylvania Reciprocity Work?

Pennsylvania has firearms reciprocity agreements with 19 states and can be read on the attorney general’s website. Non-resident CCW licenses are honored from states on Pennsylvania’s reciprocity list except for Arizona, Florida, Mississippi, Utah and Virginia.

States That Have Restricted Reciprocity with Pennsylvania