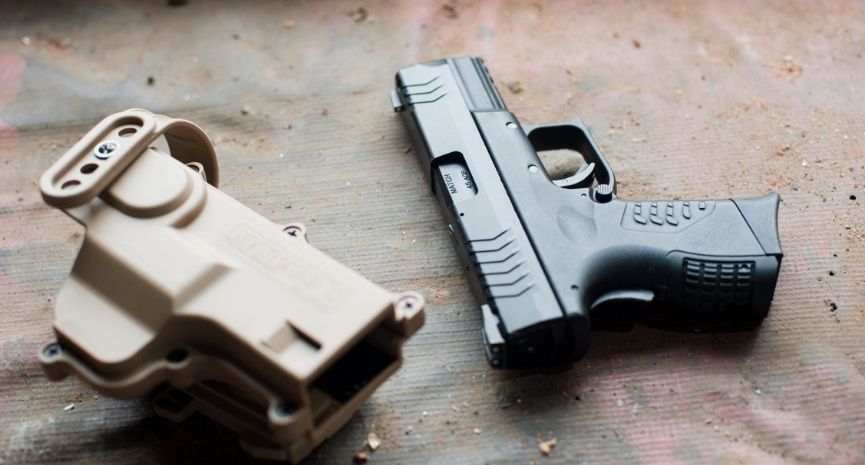 Gun laws in Rhode Island are relatively restrictive and may be difficult to obtain a permit in this state.

Local law enforcement in Rhode Island “shall-issue” licenses to eligible applicants that appear to be a “suitable person to be licensed” with “good reason to fear injury on his or her person or property” or has any other legitimate reasons for carrying a handgun.

Attorney generals also “may-issue” handgun carry licenses to a person above 21 years old with a proper reason of the need for the license and has the necessary certification to demonstrate his or her ability to use a handgun safely.

Something different from the local authority-issued license is that the attorney general can issue licenses to undocumented persons.

When it comes to purchasing a handgun, the buyer must obtain a Rhode Island License to Carry Concealed Weapon (LCCW) or a “blue card” from the RI Department of Environmental Management.

Those purchasing a handgun from a private individual will also need to undergo a background check that can be obtained through the state police or local chief of police.

License applicants must be at least 21 years old and be able to explain the need for a firearm and three notarized character references. Additionally, the carry license applicant must also successfully complete a firearms training course that includes a live-firing test to demonstrate their ability to safely use a handgun.

Non-residents of Rhode Island may also apply for an LCCW through local law enforcement with a permit from their home state. However, only the attorney general may issue LCCWs to non-residents without permits.

Nonetheless, there are areas in Rhode Island which are completely off-limits to firearms regardless of whether the person has a carry license or not. Some of these off-limit areas include state parks and federal buildings.

Rhode Island is a Castle Doctrine state with no duty to retreat. Residents of Rhode Island have the right to meet force with force for self-defense purposes at a place where he or she is lawfully permitted to be.

The state presumes that the person who used force acted reasonably by means of self-defense from great bodily harm or death. Residents of Rhode Island also do not have the duty to retreat from another person engaged in the following situations:

No, Rhode Island does not allow constitutional carry.

Yes, Rhode Island permits open carry but only with a RI LCCW that’s issued by the attorney general.

What’s the minimum age a concealed carry license applicant needs to be?

The minimum age to apply for concealed carry in Rhode Island is 21 years old.

Does Rhode Island have restrictions for handgun magazine capacity?

No, Rhode Island does not have handgun magazine capacity restrictions.

Does Rhode Island have ammunition restrictions?

Do residents have a duty to inform a police officer that they’re carrying a concealed firearm in Rhode Island?

No, Rhode Island does not impose a duty to inform law enforcement officers that you’re carrying a concealed firearm.

Is the carry license linked to the driver’s license in Rhode Island?

Are “No Weapons Allowed” signs enforced in Rhode Island?

No, Rhode Island does not enforce “no weapons allowed” signs.

Does Rhode Island have pre-emption laws related to concealed carry?

Yes, Rhode Island has pre-emption of firearm laws, except local governments are allowed to pass ordinances to protect public safety.

Does Rhode Island have a red flag law?

Yes, Rhode Island has a red flag law that allows a law enforcement agency to file a petition that enjoins the respondent from having in his or her possession, custody, or control of any firearms and shall further enjoin him/her from purchasing, receiving or attempting to purchase a firearm.

Does Rhode Island require a permit to purchase a handgun?

All purchasers of handguns must either have a RI LCCW or have passed a minimum of two-hour basic handgun safety course and received a safety certificate by the RI Department of Environmental Management (DEM).

Yes, Rhode Island requires both licensed dealers and private unlicensed sellers to conduct background backs through the state police before they can sell a firearm to the person. All prospective firearms purchasers must sign an application form for the background checks. Exemptions to background checks include:

Does Rhode Island impose a waiting period for handgun purchases?

Do handguns need to be registered in Rhode Island?

No, Handguns in Rhode Island do not need to be registered.

The Blue Card certifies that you’ve completed the handgun safety exam which is a 50-question exam with true/false and multiple choice questions. The exam can be completed at any RIDEM-approved firearms dealer or sporting club in the state or at the RIDEM Headquarters in Providence.

There is no fee for the exam and a study booklet can be obtained by calling the RIDEM Division of Fish and Wildlife. You’ll need to score at least 80 percent on your test to pass and receive the Blue Card.

Active military personnel has the option to waive the handgun safety exam requirement and obtain a Blue Card by presenting their Military ID at either the RIDEM Division of Fish & Wildlife Great Swamp Field Headquarters or RIDEM Headquarters at 235 Promenade Street, Providence, Rhode Island.

Regardless of whether you’re purchasing a handgun through a private transaction or through a Federal Firearms Licensee (FFL), you’ll need to complete a Purchase of a Pistol or Revolver Application Form.

The law also requires a 7-day waiting period after filling in the form with State Police, during which a background check will be completed. If approved, you may collect your firearm after the waiting period has passed.

Rhode Island gun law requires a concealed handgun license applicant to be able to undergo firearms training to demonstrate that they are qualified to use a handgun of a caliber equal to or greater than the caliber of handgun they intend to carry.

The applicant must obtain a score of at least 195 out of 300 and perform 30 consecutive live fire rounds at a distance of 25 yards on any army “L” target firing “slow” fire.

Range officers of Rhode Island state police or any other police department maintaining a regular and continuing firearms training program, National Rifle Association and/or United States Revolver Association certified pistol instructor or any other qualified persons that the attorney general designate are authorized to train and certify the qualification.

LEOs and RLEOs are protected under the Law Enforcement Officers Safety Act (LEOSA) (also referred to as HR 218.). Qualified LEOs and RLEOs are permitted to carry a concealed firearm in any jurisdiction in the United States, regardless of state or local laws.

Areas permitted to carry handguns or other weapons

The applicant for the carry license must:

Step 2: Complete the application and have it notarized. And prepare 3, typed, signed and dated notarized reference letters.

Step 4: Have the application signed or stamped by the local police chief or city hall official if applying through the attorney general.