Every person has a different view on what kind of ammo works best for a Ruger 10/22. There are plenty of options available on the market that are readily available. However, you will have to figure out which one works best for your rifle.

In this article, we will learn about which qualities make one type of ammo more preferable than the others. You will also learn about the top-rated ammo brands available on the market that befits your Ruger 10/22.

What Makes Some 10/22 Ammo Better Than Others?

There are a lot of variations between different types of ammo available as one of the upgrades on the market. The primary difference includes the center-fire vs rim-fire ammo and steel vs brass casings.

If you should need to know, the standard Ruger 10/22 uses a .22 Long Rifle rim-fire ammunition. Its primary difference between the rim-fire and center-fire ammo is their use and cost.

The rim-fire ammo is used for plinking and building up skills. It also can be used for small game hunting and shooting competitions. Rim-fire ammo is relatively more affordable. You are able to buy a box of 500 rounds for US$20. Your Ruger 10/22 is a rim-fire rifle and it uses the same type of ammo.

The center-fire ammo, on the other hand, is more powerful comparatively and can be used for distance shooting. As a rim-fire has an effective range of 100 yards, center-fire rifles can do well beyond that.

However, the center-fire ammo is said to be quite expensive. You will have to shed US$20 for just 50 rounds it seems.

There are also brands of ammunition available on the market that are also termed as “dirty ammo”. It isn’t a brand name any companies are going to use for themselves. “Dirty ammo” simply means that it is a kind of ammunition that often leaves behind a lot of grime (and dirt) in your rifle.

That means you will have to clean your rifle after every 50 rounds or so, inconveniently. That is where the name “dirty ammo” come from.

Dirty ammo is often very cheap and people who like plinking usually do not mind the fouling. Only if you are someone who cleans your rifle after every shooting session anyway. It may be something you are willing to put up with, who knows.

Ammo differs based on its effective range (accuracy), fouling and the cycling of rounds. In some cases, the .22 short rifle ammo sometimes may fail to cycle. That is because it is a low-power, sub-sonic round that fails to provide sufficient blowback force for re-loading.

At the same time, high-velocity ammo has been reported to damage the action rifles by putting too much pressure on the bullet set-back.

In all honesty, the kind of ammo that works the best are different for every rifle. Even if it means every last one of them. There is no consensus on the best. The slight difference between your .22 may take 1 ammo better than the other for that particular gun.

The solution is usually trial and error most of the time. You will have to buy different types of ammunition to try. Get about 50 rounds each and it can help you figure out which works best for your individual Ruger 10/22 rifle.

Some users and fans of the .22 say that the UMC ammo is junk, whereas some others say it is the best. It’s like saying “one man’s trash is another man’s treasure”. The same can be said for most brands. It all depends on your rifle and how you use it.

The .22 LR comes in a few varieties. The bullet weight ranges anywhere from 20 to 60 grains. Bullet velocities vary from about 575ft/s to 1750ft/s.

Subsonic rounds travel slower than 1080ft/s. Unlike faster rounds, it is not overtaken by their own sonic shockwave as they fall below the speed of sound midflight.

With that being said, subsonic rounds are more stable and accurate. Subsonic .22 ammunition with lighter bullets provide minimal damage on impact and are therefore best for target shooting.

With heavier bullets, .22 subsonic ammunition can be used for hunting small game without too much noise.

Standard velocity .22 LR ammunition flies at a velocity that is close to the speed of sound. That is when shot from a rifle barrel. Pistol barrels may be too short to burn up all the powder and reach its maximum velocity.

High velocity .22 LR ammunition came to be with the invention of smokeless powder. Smokeless powder is more efficient than black powder. That allows an 8% increase in velocity, which surpasses 1300 ft/s with a 40 grain bullet.

Hyper velocity .22 LR ammo uses lighter bullets – around 30 grains – and slower burning powder. That means the high pressure is maintained behind the lighter projectile as it passes down the barrel. Some manufacturers also add extra powder, which pushes the bullet past 1400 ft/s.

The CCI Mini-Mag is perhaps one of the most renowned .22LR ammunition on the market. It features a 36-grain projectile, which is the best for shooting up to 75 yards. If you are someone who likes plinking, then this Ruger 10/22 ammo is right for you.

It is priced at a reasonably low rate compared to its counterparts – it provides tight grouping at short distances. The CCI Mini-Mag has a copper-plated hollow point (CPHP) bullet, which leaves the muzzle at 1260fps.

It is great for varmint hunting, and you can burn hundreds of rounds without any considerable fouling. It is available in a box of 100 rounds, and the CCI Mini Mag ammo is quite clean for the Ruger 10/22. 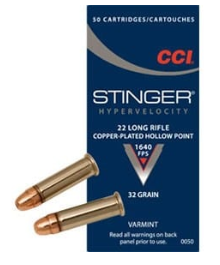 This is a high-velocity round from CCI. The stinger is known for its speed. It is a 32-grain bullet which leaves the muzzle at 1640fps.

However, Ruger suggests that these hypervelocity rounds should not be used too much with your Ruger 10/22. That is because these rounds travel at high velocities.

This in turn generates a higher blowback stress on your action. That can result in wear and tear on your receiver. They also recommend not using the Stinger ammo at all with some of its models, such as the takedown version.

This Ruger 10/22 ammo also features a copper-plated hollow point bullet with a tear drop cavity for complete disruption. The rounds a great for hunting, especially for bigger varmints. That is mostly because of the high velocity that offers deeper penetration.

The CCI Stinger is quite inexpensive, so to speak. It is clean burning and keeps your action all the more cleaner. 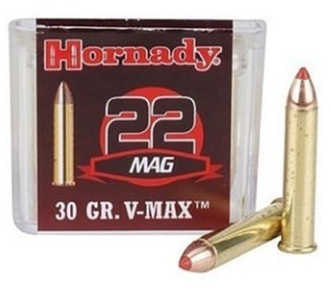 Ruger used to produce a 10/22 Magnum that is capable of firing .22 WMR ammunition back in the day. Check the markings on your gun’s receiver to see if yours is one of it.

If it says .22 WMR, you’ll be lucky. However, if it says .22 LR, do not attempt to load or fire this ammunition in your gun. These rounds offer far greater performance than the standard .22 LR.

The 30 grain projectile leaves the barrel at 2200 ft/s. That is about twice as fast as a standard .22 LR. Hornady’s V-Max bullets are designed to be accurate, have flat trajectories, and exhibit devastating expansion and fragmentation.

These are top quality, high tech projectiles featuring a polymer tip and jacketed lead core. They are designed to have the best possible aerodynamics with a devastating terminal ballistics. Those are made specifically for shooting varmints.

Its awesome design and high power in a compact size arguably makes it the ideal survivalist round. If you are at about 125 yards, the effective range of those rounds are also greater than the .22 LR.

If you have (or are able to) find a Ruger 10/22 Magnum rifle, .22 WMR somehow offers you a substantial increase in performance over standard .22 LR. A lot of shooters hardly go back.

These Hornady V-Max rounds take it a step further with their extremely well-designed and well-built bullets. The accuracy coupled with flat trajectory and show stopping expansion will keep you coming back for more.

Those rounds proves more than usual that rim-fire isn’t just made for kids. You can lay back with ease in Hornady ammunition, which is American made with a warranty against manufacturing defects. It is pretty hard to beat Hornady for factory-loaded ammunition in all honesty. 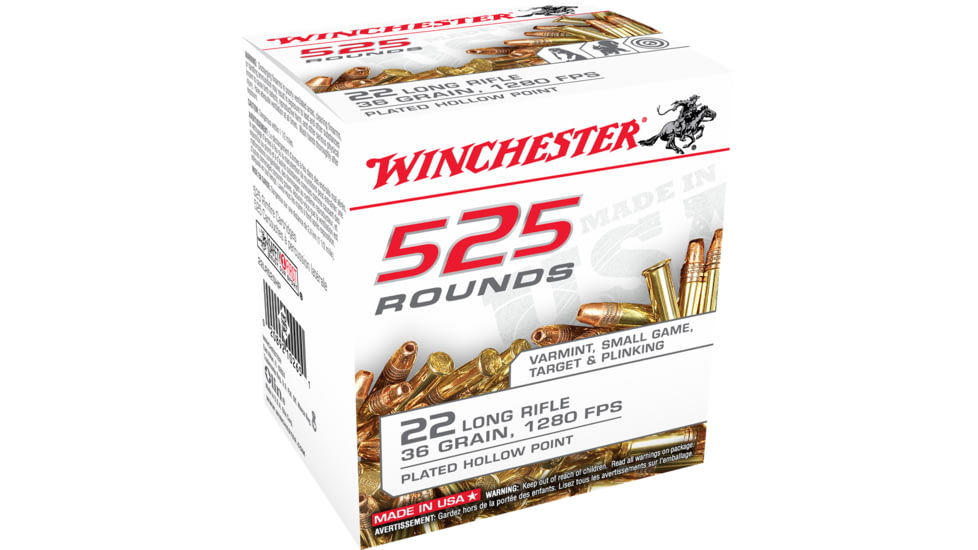 Winchester does not need an introduction when it comes to firearms. Those 36-grain .22LR rounds are a unique choice of Ruger 10/22 ammo for multiple uses such as plinking, hunting, and target shooting.

The round is a copper plated hollow round (CPHP) bullet, which claims ti reduce fouling due to the copper plating. The bullet has a muzzle velocity of 1280 feet per second, placing it in the average range for .22 shots.

This ammunition is available in boxes of 333 rounds and 525 rounds. Its price will not do much damage to your wallet so to speak. 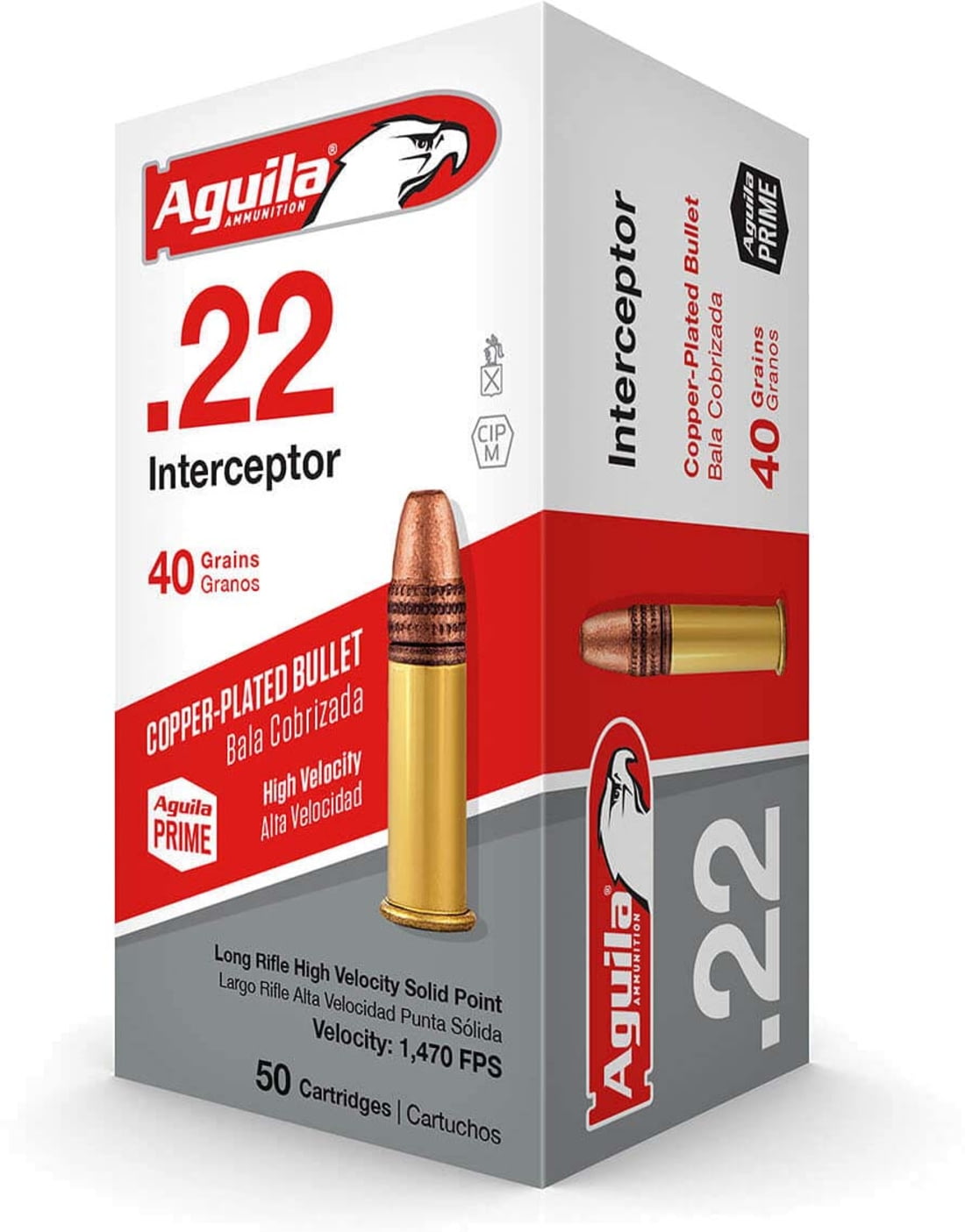 Aguila is known for offering great quality firearms at a good price. They are also known for their cutting-edge innovations such as the shotgun mini shell and the .22 Sniper Subsonic. Aguila’s Super Extra Standard Velocity rounds provide exceptional reliability rather than innovation to America’s most popular round.

The Super Extras are ideal for affordable plinking or target practice. However, they also perform admirably for small game hunting too. The accuracy does not disappoint and the statistics are standard as the name suggests.

Aguila says the 40 grain bullets have a muzzle velocity on the high side of standard – at 1130 feet per second.

The bullets come in boxes of 50 or cases of 5000. This Ruger 10/22 ammo is known for its reliability and consistency. They are manufactured in a state of the art facility in Mexico.

It is said that Aguila uses only high quality new materials and implements a rigorous quality control regimen. There are a few countries where guns and ammo are taken as seriously as America. Mexico is one of the countries up there with USA. There are only a few of Aguila’s competitors that can offer the same value for money as it can.

Whether you are looking for Ruger 10/22 ammo for plinking, target shooting, or hunting small game, these Aguila Super Extra Standard Velocity .22 rounds are hard to top. The quality and reliability for the price is the main selling point. The Aguilas is accurate and consistent and they might leave you surprised at what your firearm is capable of.

Although they are not American made, they are probably the best things made in Mexico since Hollywood.

Here are some frequently asked questions (FAQ) for your referral.

The Ruger 10/22 is a series of semi-automatic rifles made by the American firearm manufacturer, Sturm, Ruger & Co, which is chambered for the .22 Long Rifle rim-fire cartridge. It uses a patented 10 round rotary magazine, although higher capacity box magazines are also available.

Traditionally about 100 yards. However, you can shoot a 22 as far as you like. For some people, the maximum effective range is about 100 yards. If sighted in at 50 yards, you will be about 5” low at 100 yards. You can estimate 5”.

However, anymore drop than that is just plinking for the fun of it. Unless you zero in for a longer range.

Yes, a Ruger 10/22 can shoot mini mags. You can opt for CCI mini mags, which shoots great out of 10/22 carbines. CCI ammo is considered as some of the best stuff you can get your hands on.

Q: How can different types of ammo affect the performance of my Ruger?

There are generally 4 types of ammo: subsonic, standard velocity, high velocity, and hyper velocity. They weigh differently and subsonic is generally more stable as they are heavier, while hyper velocity is a lot lighter, therefore faster.