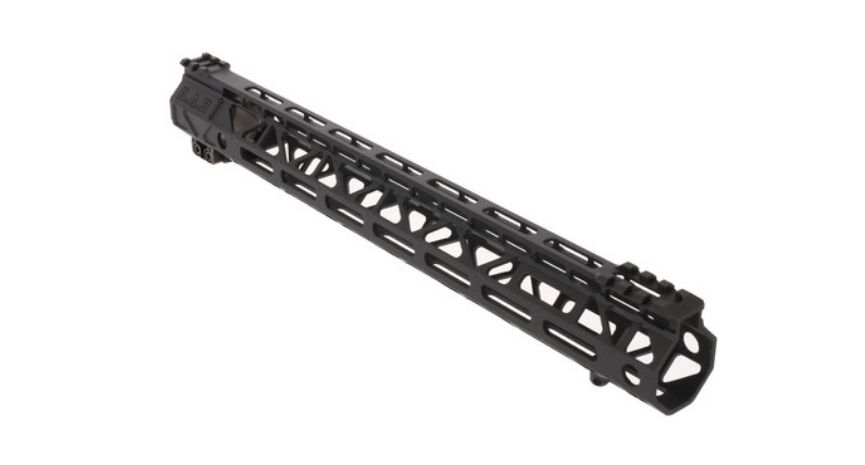 The Ruger AR-556 is the most rugged and affordable entry-level AR-15 style rifle. If you already own one, you might be thinking of upgrading the handguard and due to its sheer versatility, you can easily find one on the market anytime and anywhere.

One of the most important factors in Ruger AR-556 handguards are its mounting options. Most of these handguards would come with a rail along its top. Quad-rail handguards feature rails on all 4 sides to provide you with the maximum versatility.

These days, most handguards come with Picatinny or universal types, whereas some have on-rail attachment systems like the KeyMod or M-LOK.

Polymer handguards are much lighter than aluminum variants but at the same time, they could also be less durable. In terms of aesthetics, most shooters prefer the sleek modern look of from the free float handguards, whereas other shooters love the mystique in various styles of drop-in versions.

Of course, the budget is important, like any other accessories or upgrades. If you think getting the best Ruger AR-556 handguards are going to break the bank, you might be wrong. On this list, we have shortlisted some of the best Ruger AR 556 handguards that are available at an incredibly affordable price so everyone could afford it. 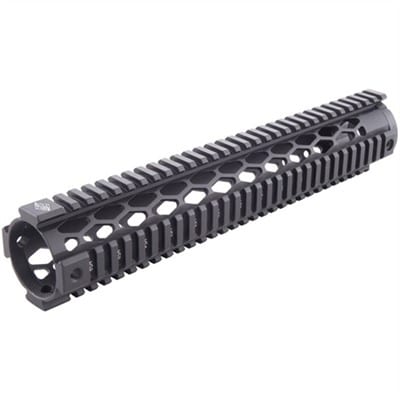 This is a free-float handguard that’s manufactured from Yankee Hill, which are widely recognized for manufacturing reliable and attractive handguards in America. Holding such a high standard, it shouldn’t be a surprise that Yankee Hill has made it as one of the giants in the modern sporting rifle industry.

The AR-15 Diamond Pattern Free Float Handguards strikes the right balance between aesthetics and practicality. As such, none would compromise for the other. The 4 full-length rails would offer you the maximum versatility in terms of mounting 3rd party components. Therefore, you won’t have to worry about compatibility issues.

Between the rails, the handguard features diamond-shaped vents that provide great ergonomics besides having a really sleek look. In terms of heat distribution, a design like this is a cut above the rest of the Ruger AR-556 handguards so you won’t have any overheating issues.

Coming with a hard coat anodized aluminum that’s aircraft-grade, it easily meets the military specifications for handguards. The AR-15 Diamond Pattern Free Float Handguards is available in 3 lengths, 7’, 9’, and 12’. In terms of fit, it would fit perfectly over any low-profile gas block.

The handguard comes with all the necessary mounting hardware you need, particularly: the jam nut, barrel nut, and anti-rotation screws. Now, you won’t have to worry about purchasing these essential parts separately.

The top rail will extend over to the barrel nut to provide you with a seamless transition from the receiver rail of the AR-15 Diamond Pattern Free Float Handguards. The slots on all 4 rails are T-marked (alphanumerically) to allow consistent remounting.

You want to buy without risks. The AR-15 Diamond Pattern Free Float Handguards is 100% made in the USA and covered by a generous lifetime warranty. As such, you won’t be exposed to any risks of receiving a defective handguard. Should you come across any problems, ring up the customer service and they’ll be more than happy to serve you.

You want a durable handguard. The AR-15 Diamond Pattern Free Float Handguards features wide diamond-shaped vents that work really well in keeping your barrel and hand cool as you shoot over extended periods of time. Besides that, the aircraft-grade aluminum would make sure that the handguard wouldn’t be damaged from rough use.

You don’t have a Yankee Hill nut wrench. One of the shortcomings of the AR-15 Diamond Pattern Free Float Handguards is the installation bit. For that, you will need to have the Yankee Hill Nut Wrench where you might have to purchase it separately. That said, this is a pretty common item so you could go around to see if any of your friends could lend you theirs. 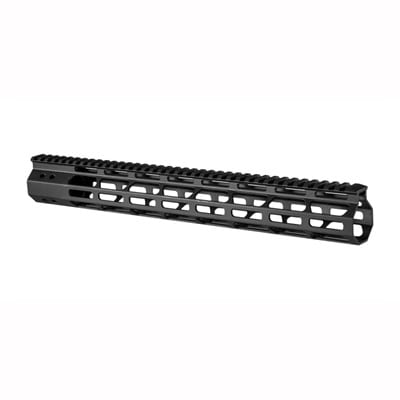 The AR-15 Fm-9 Handguard Free Float M-Lok strikes the right balance between weight and quality. It has just the right amount of weight without compromising on the handguard’s quality. This M-Lok system from Magpul would allow you to mount almost any tactical accessories without packing on the weight of added rails.

In fact, besides not adding weight from the 7 rows of M-Lok slots on the handguard, the AR-15 Fm-9 Handguard Free Float M-Lok effectively reduces a significant amount of excess weight on handguards. This is also significantly attributed to the handguard’s slim profile compared to the other Ruger AR-556 handguards.

As the M-Lok system was specifically designed and created by Magpul, which is known to be one of the most trusted manufacturers for AR components, you won’t have any compatibility issues with this Ruger AR-556 handguard.

Despite being lightweight, the quality of the AR-15 Fm-9 Handguard Free Float M-Lok has been enhanced by the adoption of mil-spec materials and a construction procedure that are compliant to almost all the international standards for quality control such as the ISO:9001 and the AS:9100.

In terms of construction, the AR-15 Fm-9 Handguard Free Float M-Lok’s barrel nut is machined from steel, and the handguard itself is constructed from 6061 T6 aluminum that’s mounted to it with 8 stainless steel bolts. Now, you won’t have to worry about your Ruger AR-556 handguard breaking down anytime soon.

You want a lighter handguard. The AR-15 Fm-9 Handguard Free Float M-Lok is perhaps one of the lightest handguards with these set of features. Made from premium-grade materials, you won’t notice any compromise in the handguard’s quality for its lightweight.

You want a reliable product. The AR-15 Fm-9 Handguard Free Float M-Lok is manufactured by Magpul, one of the best firearms and firearms components manufacturer in America. In addition, this handguard also comes with a lifetime warranty so you won’t be exposed to any risks in your purchase.

You want guidelines for torque values. Some shooters have mentioned that the AR-15 Fm-9 Handguard Free Float M-Lok does not come with adequate guidelines, particularly for the torque values. If that’s an issue for you, this might not be your best buy.

If you didn’t know, Troy Industries has been developing and manufacturing nothing but great firearms and firearm components since they were in this business.

The AR-15 Alpha Rail Handguards from Troy Industries features two 2-inch lengths and one 4.2-inch length of the modular rail. With the top rail alphanumerically marked, you will notice excellent consistency when it comes to mounting your accessories.

This Ruger AR-556 handguard will come with all the necessary hardware to mount the modular rails to wherever you like. The vents on the AR-15 Alpha Rail Handguards form large circles to provide excellent ventilation and weight reduction. In addition, the textured body of the rail would also allow you to have an excellent grip as you shoot.

The AR-15 Alpha Rail Handguards is a free-float handguard that mounts on a standard barrel nut (not included). The 2 hex-head bolts would lock together in place and built-in stop functions to prevent any over tightening situations.

In terms of construction, the AR-15 Alpha Rail Handguards is constructed from high-grade, mil-spec aluminum along with a hard coat anodization that you would definitely want to see on the best Ruger AR-556 handguards. As such, you won’t have to worry about your handguards breaking down anytime soon.

It should also be highlighted that the hex-head bolts are stainless steel, and the handguard is constructed with various lengths. Nonetheless, the 13-inch model would still stand out from the rest as most shooters love the length.

You want a durable handguard. The AR-15 Alpha Rail Handguards are constructed from mil-spec materials along with great venting to remove most of the heat from high-rates of fire effectively. As such, you won’t have overheating and lifespan issues with this handguard.

You are a tactical shooter. The AR-15 Alpha Rail Handguards is lightweight and doesn’t compromise at all when it comes to quality and performance. Its secure free float design is one of the main selling points to many shooters.

You are shopping on a tight budget. Although the AR-15 Alpha Rail Handguards is available at an extremely affordable price with a great price/value ratio, it isn’t the cheapest Ruger AR-556 handguard on the market. If you have a really tight budget, this might not be your best buy. 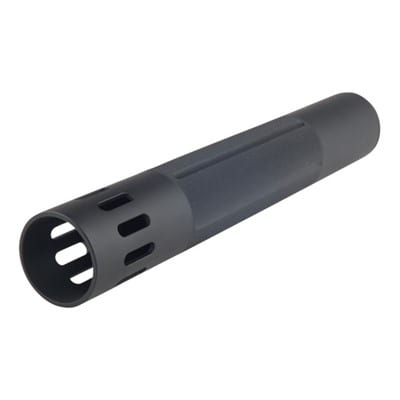 If you think the AR-15 Free Float Handguards isn’t well-engineered because of that, you are wrong. This Ruger AR-556 handguard was specifically designed to be effective, lightweight, and extremely affordable so that everyone could have a great shooting experience without breaking the bank.

The AR-15 Free Float Handguards comes with its own barrel nut to offer you a secure, fast, and simple attachment without going through too much hassle like other handguards. The central length of this handguard is knurled to provide you nothing but a solid grip.

The 5 sleek flutes on this Ruger AR-556 handguard have been specifically machined out to reduce a significant amount of weight. Therefore, you won’t be carrying any excess and unnecessary weight around with you as you hunt/shoot all day on the field.

In terms of construction, the AR-15 Free Float Handguards is constructed with the aircraft-grade 6061 T6 aluminum along with a black hard coat anodization. It is made and manufactured in the USA coupled with a lifetime warranty so you won’t be exposed to any risks of manufacturing defects.

You are shopping on a tight budget. The AR-15 Free Float Handguards is undoubtedly a great value for money considering its near-perfect machining and quality. You won’t be able to find any Ruger AR-556 handguards with features like these at this price point.

You want reliability. The AR-15 Free Float Handguards isn’t skeletonized like most other Ruger AR-556 handguards and hence, it is significantly stronger than most handguards on the market. In addition, it comes with a lifetime warranty which serves as one of the handguard’s major selling points to shooters.

You have a longer barrel. The AR-15 Free Float Handguards is available in 13 inches and as such, it may not cover the gas block of a Ruger AR-556 rifle that has a 20-inch barrel. Nonetheless, most people wouldn’t have barrels more than 16 inches, therefore it isn’t a big deal.