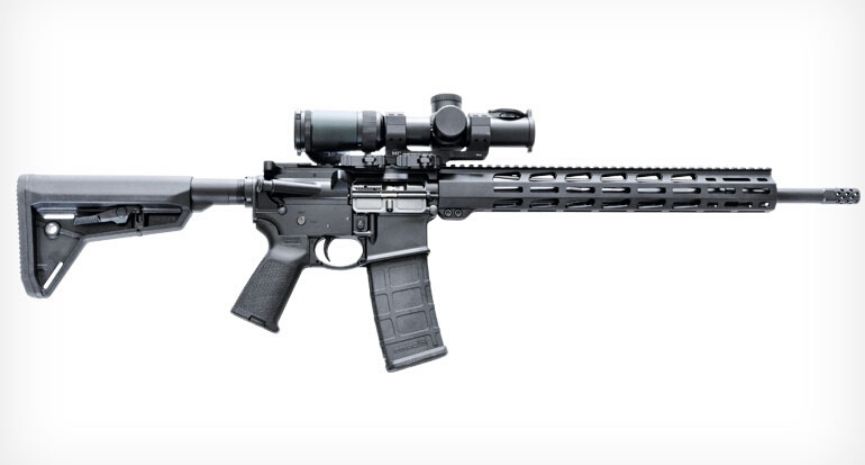 It didn’t take long for the Ruger AR-556 to become a direct-gas-impingement of the M4-style AR-15 rifle of choice for most shooters in America. This is largely attributed to the fact that the Ruger AR-556 would give you everything you need in a well-made and reliable package for a reasonable price.

Although it took them a few years, Ruger finally came up with the second version of its AR-556 – The Ruger AR-556 MPR (Multi-Purpose Rifle). From the name, it’s pretty clear that Ruger specifically designed this rifle to be a do-it-all AR-15 platform. Their original AR-556 was capable of its own right, but the difference between these 2 variants definitely add up to substantially different packages.

2 of the most substantial differences between the original AR-556 and the MPR are definitely their barrel length and handguards. The AR-556 features a 16-inch barrel along with fixed front sight and a round polymer handguard. Whereas the new MPR comes with an 18-inch barrel inside its free-float aluminum handguard.

Before we dive deeper, let’s have a look at the Ruger AR-556 MPR’s specifications 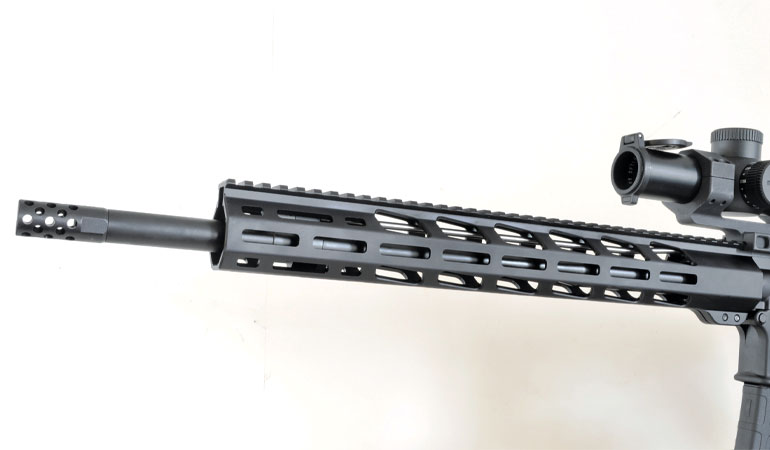 The MPR’s 18-inch barrel features a 1:8 twist rate. This twist rate is widely known to be the best twist rate possible for an AR-15 barrel as it would easily handle bullets from 35 grains up to 77 grains, basically, every bullet weight that fits into a .223 or a 5.56mm NATO magazine.

In addition, the Ruger AR-556 MPR came with 5-groove rifling, which was specifically incorporated to offer you excellent accuracy. The barrel also came with a cold-hammer-forged 4140 chrome-moly steel along with a nitride finish for corrosion resistance purposes. Now, you won’t have to worry about hiding your Ruger AR-556 MPR as you shoot/hunt outdoors when the weather starts turning unfavorable.

For the 1st 6 inches or so, it has a heavy profile and subsequently narrows down. With the stock fully extended, the balance point of the Ruger AR-556 MPR is perfectly under the front of the takedown pin. This makes it excellent for an 18-inch barreled rifle like the Ruger AR-556 MPR.

The barrel comes with M4 feed ramps, which is great. While they were designed to elevate the Ruger AR-556 MPR’s reliability when shooting full-auto, they won’t do any harm when you decide to chug along in a simple semi-auto fire. The barrel features a 5.56mm NATO chamber, which makes it compatible with the commercial .223 Rem as well.

Instead of an A2-style flash hider, the barrel on the Ruger AR-556 MPR was tipped with a radially ported muzzle brake out of Ruger’s own design. There are ports located on the bottom of this brake and as such, you will be kicking up dust if you are shooting anywhere close to prone. It merely extends 11/8 inches past the muzzle so it essentially isn’t much longer than the ubiquitous A2 birdcage flash hider.

Featuring the standard AR threaded pitch of 1/2×28, you won’t have any compatibility issues mounting a suppressor and/or muzzle brake on the Ruger AR-556 MPR. 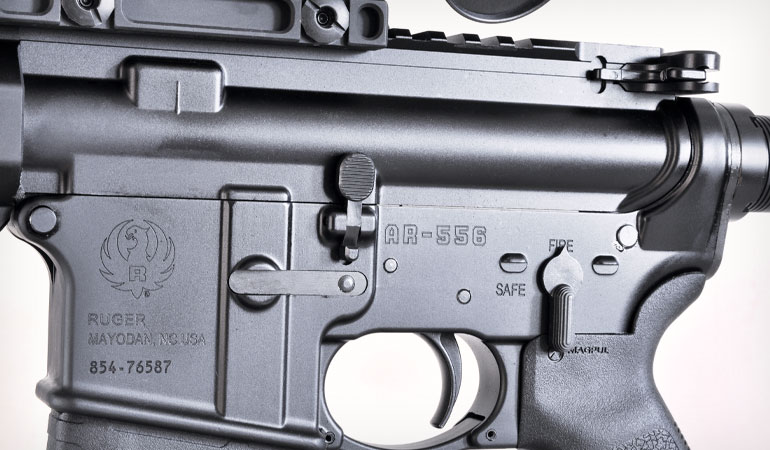 The bolt was machined from 9310 alloy steel, shot-peened, and pressure tested to give you the best durability and reliability Ruger has to offer. Unlike the original AR-556, which has a carbine-length gas system, the Ruger AR-556 MPR’s longer barrel allows it to adopt a rifle-length gas system.

The Ruger AR-556 MPR’s barrel free-floats inside its 15-inch aluminum handguard along with an M-Lok accessory attachment slot on the sides and bottom. Besides that, it also features some additional angled slots near the muzzle that would work really well if you are mounting lights and/or lasers.

The Ruger AR-556 MPR has a rather slim handguard as it is only 1.5 inches wide and 2 inches tall if you were to measure it from the top of the rail.

The M-Lok is a slot-based mounting system that was initially designed by Magpul, known to be the king of AR accessories. Hence, it shouldn’t be such a big surprise to see it on the Ruger AR-556 MPR to offer you the best compatibility when it comes to mounting accessories on your handguard. 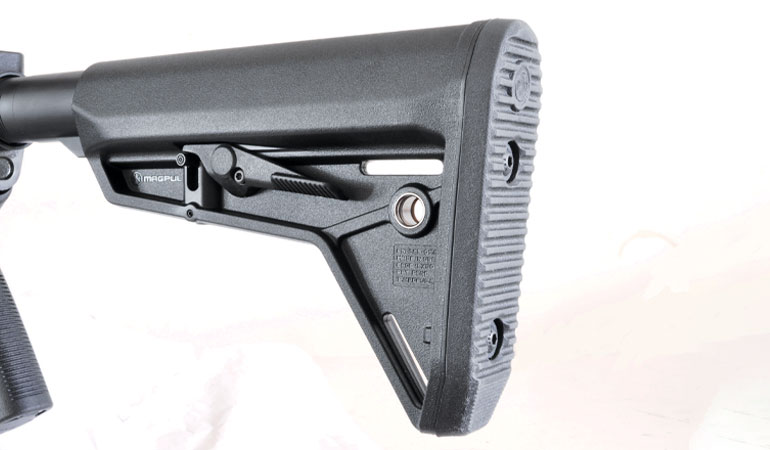 The Magpul stock on the Ruger AR-556 MPR sits on a mil-spec 6 position receiver extension.

The upper and lower receivers are constructed from 7075-T6 aluminum forgings with a type 3 hard coat anodizing. Under the Ruger logo on the left side of the receiver, you will notice that the Ruger AR-556 MPR is made in Ruger’s Mayodan, North Carolina facility.

To highlight, the upper receiver also features a brass deflector, forward assist, and a dust cover. Therefore, the Ruger AR-556 MPR is a full-featured AR-15.

The Ruger AR-556 MPR features the Ruger Elite 452 trigger, where the company first started to offer this a few years back in their SR-556 Takedown rifles. The Ruger AR-556 MPR’s Elite 452 is a 2-stage trigger that was advertised by Ruger to provide a crisp 4.5 lbs trigger pull with a full-power hammer spring.
Most of you would’ve haad a decent amount of experience with Ruger Elite 452 triggers and you would know that they usually perform as advertised, hence it is a huge upgrade from the original AR trigger.

The Ultimate Shooting Experience With The Best Price Ruger MPR

As the MPR in the name of this rifle stands for being a multi-purpose rifle, the professionals at Ruger had definitely done a great job in making sure that all the parts and accessories in the Ruger AR-556 MPR would work perfectly together.

The long modular handguards on the Ruger AR-556 MPR are in great style as they would allow you to put your supporting hand all the way out there if you wish to. This handguard would offer you all the length you need along with the space you need to mount almost any accessories.

The little bits and pieces of the Ruger AR-556 MPR work really well as a tactical rifle. With the Ruger AR-556 MPR having only an additional $100 more on its price tag than the original AR-556, you will be getting a better looking and stronger stock, a trigger pull on another level, a more modular handguard, and overall, a softer-recoiling rifle thanks to the rifle-length gas system and compensator.

Perhaps the only shortcoming of the Ruger AR-556 MPR that is worth highlighting is that it lacks the original AR-556’s iron sights. You will have to purchase the sights or any other optics to your preference separately.

What are the Ruger AR556 Problems?

The potential problems that may arise to your Ruger 556 is the buttstock due to the adjustment. Fret now, this issue can be overcome easily but you just need to spend some time to ensure the stock to pull out or push in the right direction. This can be solved by squeezing the lever to tuck it in to fully extend it. I believe that the malfunction or collapsing of the buttstock abruptly is due to the over-tension being contained in it to maintain the position.

However, do not worry as this is only arise to this particular type of AR rifle.