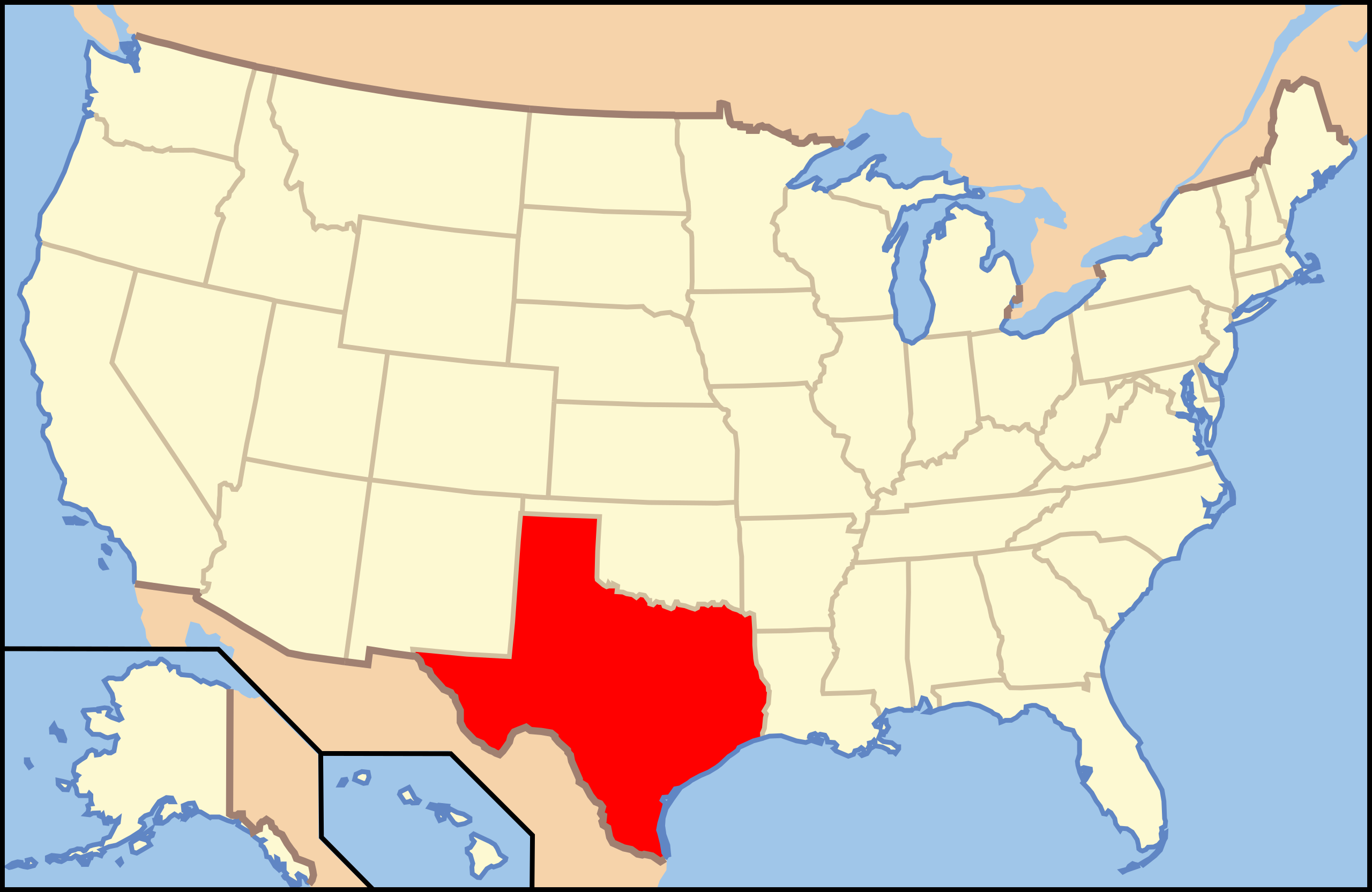 Texas is classified as a “shall Issue” state, which means that anybody over the age of 18 can own a handgun. Texas gun laws do not control gun ownership, therefore anybody, regardless of age, can own a handgun as long as they are not a felon.

When buying a firearm from a federally regulated dealer, you must be at least 21 years old. Residents and non-residents alike are awarded carry permits after completing a 4-6 hour training session. It is lawful to carry a handgun openly if it is holstered in a shoulder or belt holster.

Texas will accept any non-resident permits from states that Texas recognizes as long as the license holder is at least 21 years old.

The Department of Public Safety has signed reciprocity agreements with 31 additional states, which may be seen on their website.

States that will honor a Texas LTC license

States that will not honor a Texas LTC license

To qualify for a Texas LTC license, you must be a legal resident of this state for the six months preceding the date of application under this subchapter or be otherwise eligible for a license under Section 411.173(a); be at least 21 years old; or be at least 18 if you are a member or veteran of the United States Armed Forces, Reserves, or National Guard who was discharged under honorable conditions; have not been convicted of a felony; have not been convicted;

Is not incapable of making appropriate decisions about the safe use and storage of a weapon; Has not been convicted of a Class A or Class B misdemeanor or comparable offense, or of an offense under Section 42.01 of the Penal Code, or equivalent offense, in the five years before the date of application; is fully qualified to acquire a weapon under relevant federal and state law;

Has not been judged to be late in making a child support payment that the attorney general administers or collects; Has not been adjudged to be overdue in the payment of a tax or other money collected by the comptroller, a political subdivision’s tax collector, or any other state agency or subdivision;

Has not been adjudicated as having participated in criminal activity breaking a felony-level penal statute in the ten years before the date of application; and has not made any substantial misrepresentation or omitted to disclose any material truth in an application submitted according to Section 411.174.

How to Obtain an LTC License in Texas

To be a license holder, follow these procedures: to begin, either print out the application form or fill out an online application.

Make an appointment to have your fingerprints taken. L-1 Enrollment Services is required to submit all fingerprints.

In addition, applicants must take 4 to 6 hours of classroom training, pass a written test, and then demonstrate competency (shooting). Online classroom instruction is available.

To complete the application, you must submit a Certificate of Course to the Department of Public Safety once the training is finished.

If you are submitting your application by mail, please send it to:
Texas Department of Public Safety
Concealed Handgun – MSC 0245
PO Box 4087
Austin, TX

Non-residents and out-of-state residents must provide a color copy of their state driver’s license or ID card, front and back. A competency certificate from a DPS-approved course that is less than two years old. Non-residents can apply online or through the mail.

Handgun license renewals can be submitted up to 6 months before the license expires. Renewals are also possible up to 12 months beyond the license’s expiration date.

In addition, renewal applications submitted more than 12 months after the expiration date will be processed as new applications.

Renewal candidates are no longer required to attend a training class as of September 1, 2013. Renewals may also be done online, and you’ll normally be alerted approximately 6 months before your license expires that it needs to be renewed.

Off-limit places for carrying a firearm/CCW

Furthermore, carrying a concealed handgun is illegal if a person is involved in criminal activity, and you cannot carry a handgun in polling booths on election day, racetrack grounds, airport guarded areas, public or private driveway or any other location where the carrying of guns is forbidden by state or federal law.

Whereas, you are allowed to carry a handgun for concealed carry weapon in state parks, state and national forests, road side rest areas, in vehicles and also all areas of the state not listed as Off-Limits.

Vehicle carry (with no pistol license)

Anyone who is legally allowed to carry a handgun in a vehicle is allowed to do so.

If you do not have a Texas concealed carry license or a gun license from another state that Texas recognizes, the handgun must be concealed in the glove box, console, or other place, not on your person.

You can carry it in a vehicle if the handgun is in a shoulder or belt holster if you have an LTC license. You may also conceal carry in whichever mode you choose.

Open carry (with no pistol license)

In Texas, you’ll need an LTC license to open carry a handgun.

If you have an LTC or another state license that Texas recognizes, you can only open carry if the handgun is holstered on your shoulder or waist. Only in certain circumstances is it legal to open carry in Texas. When you open carry, the police have the power to inquire for your license to carry.

However, if police enforcement asks for your weapon license and identification, you must comply with the law. For further information, please view the video about traffic stops.

If “No Weapons” signs fulfil  specific conditions, Texas gun regulations make them legal. In Texas, there are now three signs that are legally enforced to restrict the carrying of firearms; a picture of each sign is shown below.

Any other no weapons signs, such as the typical circle with a line through it, are not enforceable or legally binding; to be legally enforceable, the sign must be exactly as those depicted below.

The 51 percent sign must be shown in any establishment that earns more than 50% of its revenue from alcoholic drinks. You are not authorized to carry in these businesses even if you have an LTC license. 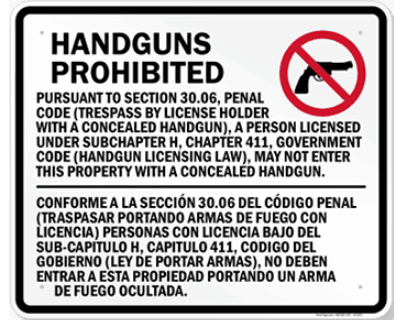 If you may carry in a restaurant that offers alcohol, the answer is “Yes” or “No.” Some restaurants may have “NO GUN” signs displayed. Check with the staff to see whether this just applies to the bar. If we’ve chosen “Yes,” it should be legal to eat a meal without consuming alcohol.

The state of Texas does not have constitutional carry.

Any individual 18 or older who is not a felon is entitled to buy, sell, or lease a firearm from a private citizen. In Texas, no gun registration or purchasing license is necessary.

A person must be 21 years old or older to acquire a firearm from a federally licensed gun dealer.

(a) Notwithstanding any other law, including Section 43.002 of this code and Chapter 251, Agriculture Code, a municipality may not adopt regulations relating to:

the transfer, private ownership, keeping, transportation, licensing, or registration of firearms, air guns, knives, ammunition, or firearm or air gun supplies; or
the discharge of a firearm at a sport shooting range.

(b) Subsection (a) does not affect the authority a municipality has under another Texas law to:
require residents or public employees to be armed for personal or national defense, Texas law enforcement, or other lawful purpose;

regulate the discharge of firearms or air guns within the limits of the municipality, other than at a sport shooting range;

regulate the use of property, the location of a business, or uses at a business under the municipality’s fire code, zoning ordinance, or land-use regulations as long as the code, ordinance, or regulations are not used to circumvent the intent of Subsection (a) or Subdivision (5) of this subsection;

regulate the use of firearms, [or] air guns, or knives in the case of an insurrection, riot, or natural disaster if the municipality finds the regulations necessary to protect public health and safety;

(6)regulate the carrying of a firearm by a person other than a person licensed to carry a handgun under Subchapter H, Chapter 411, Government Code, at a:
public park;

public meeting of a municipality, county, or other governmental body;

public property; or private property without consent of the property owner.

The exception provided by Subsection (b)(6) does not apply if the firearm is in or is carried to or from an area designated for use in a lawful hunting, fishing, or other sporting event and the firearm or air gun is of the type commonly used in the activity.

In this section:
“Air gun” means any gun that discharges a pellet, BB, or paintball by means of compressed air, gas propellant, or a spring.
“Knife” has the meaning assigned by Section 46.01, Penal Code.
“Sport shooting range” has the meaning assigned by Section 250.001.
The attorney general may bring an action in the name of the state to obtain a temporary or permanent injunction against a municipality adopting a regulation in violation of this section.

Who Can Carry a Handgun

On September 1st, 2021, a new Texas law (HB 1927) went into force. People who meet the requirements can now carry a handgun in a public location in Texas without a license (LTC). Texans who qualify for an LTC may be eligible for extra benefits. For more information, see our License to Carry page.

The Texas Penal Code Sections 46.02 and 46.04 define unlawful carry and possession of a handgun. To carry a handgun in public in Texas without an LTC, a person must meet the following requirements: be at least 21 years old;