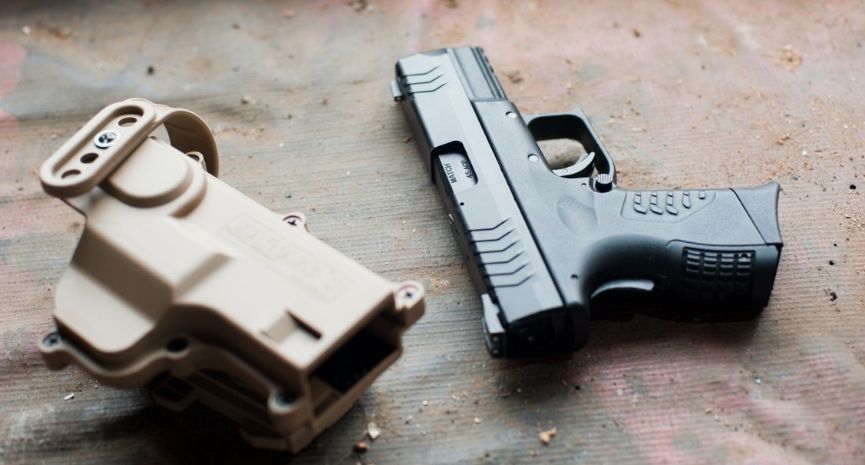 Introduction To Maryland Gun Laws in 2022

Maryland is a may-issue state when it comes to concealed weapons permits and they’re issued at state level by the Secretary of Maryland State Police (Secretary). The permit issuance is completely at the issuing authority’s own discretion in either issuing or denying the application.

The authority will only issue a handgun carry permit when he or she finds that the applicant has not exhibited a propensity for violence or instability that may render the person’s possession of a handgun to be a danger to someone else and has good and substantial reason to wear, carry, or transport a handgun such as a reasonable precaution against apprehended danger.

Residents of Maryland require a permit, background check, and firearms registration in order to purchase a handgun from a private individual. Private firearms sellers must process handgun and assault weapons transfers through a licensed dealer or designated law enforcement agency, which will run the background check on the purchaser.

On top of that, Maryland has even established a handgun roster that lists the only handguns that dealers or any private sellers are allowed to sell in the state.

Other than purchasing handguns, Maryland also requires residents to have a Maryland Wear/Carry Handgun Permit (WCHP) in order to bear arms.

Open and concealed carry are legal to permit holders and to obtain a WCHP, applicants must be at least 21 years old (or 18 years old for employment purposes) and must be able to demonstrate a substantial reason to carry a handgun. The handgun permit applications in Maryland is split into six different categories:

Each category will require additional documents.

Maryland’s handgun license require a state-approved 16-hours firearms training course that includes live-fire training by a qualified handgun instructor and an additional eight hours of training is required for each WCHP renewal.

The carry permits are available to both residents and non-residents, however, certain areas are off-limits to firearms even with a permit, including rest areas and state parks.

Maryland is a Castle Doctrine state with a duty to retreat, requiring its residents to retreat or avoid danger before choosing deadly force to defend themselves. According to gun laws in Maryland, deadly force is only legal when defending one’s self from immediate threat of serious injury or death. The person using deadly force must:

Furthermore, according to Maryland Code, a person will not be liable for damages for a personal injury or death of an individual who enters the person’s dwelling or place of business if:

Maryland’s gun laws states several rules and regulations when it comes to owning and using firearms. If you’re a gun owner in the state, here are a few important points that you need to keep in mind:

Can you carry a concealed handgun in a vehicle in Maryland?

Yes, you can carry a concealed handgun in a vehicle provided you have a Maryland WCHP. Maryland has restrictions for legal transport of firearms within Maryland without a permit.

Handguns can only be transported between residences, to and from a repair shop, a shooting sporting event, or between a residence and a place of business owned and operated by the individual.

Firearms must be unloaded and in an enclosed case with neither the firearm nor any ammunition readily accessible during interstate transportation.

Can you carry a regulated firearm at roadside rest areas in Maryland?

No, the display of firearms is prohibited at roadside rest areas.

Can you carry a concealed firearm in bars and restaurants that serve alcohol?

Yes, Maryland does not have a statute making it illegal for an individual to practice concealed carry with a WCHP, provided that the individual themself is not under influence.

Is there a duty to notify a police officer that you’re carrying a concealed firearm?

No, the state of Maryland does not have a duty to inform Maryland state police or law enforcement officers that you’re carrying a concealed firearm.

Is the concealed carry permit linked to a Maryland driver’s license?

No, the wear/carry handgun permit is not linked to a driver’s license. Hence, law enforcement officers will not be notified that you are a concealed carry permit holder when they run your driver’s license.

Are “No Weapons Allowed” signs enforced in Maryland?

No, there are no mentions of the enforcement of “no weapons allowed” signs in Maryland statutes.

Maryland does not honor any other states’ carry permits/licenses.

Other States’ Reciprocity with Maryland

A handgun permit applicant must;

Am I Allowed to Own a Machine Gun in Maryland?

The simple answer to this is no unless:

What Are the Penalties for Unlawful Gun Possession in Maryland?

Maryland has various penalties for unlawful possession of a firearm within the state. Some of the penalties under gun laws in Maryland are as follows:

Second Offense: Up to 10 years in prison and potential fines.

Third or Subsequent Offenses: At least 3 years in prison, though no more than 10 years.

What is an Upgraded Charge?

Upgraded charge according to State Law is when someone is found in the possession of a weapon while committing another crime. One example is when an individual is caught committing a robbery, which involves the forcible taking of a property.

And at the time of apprehension, the state police found that you are also in possession of a firearm. In this case, your standard robbery charge will be upgraded to an armed robbery charge, which comes with harsher penalties.

Does Maryland Have a Red Flag Law?

Yes, Maryland does have a red flag law. Red flag laws ensure that certain individuals who may pose a threat to either themselves or others around them to not obtain firearms.

The law states that all family members, health care providers, social workers, or law enforcement can petition the court to prohibit someone who exhibits concerning behaviors from purchasing or possessing a firearm.

Such behaviours include collecting weapons, making violent plans, or threatening another person with violence.

What is the Maryland EXILE Program?

Maryland EXILE program is designed to deter individuals from committing gun crimes and to harshly prosecute repeat offenders and violent gang members. With this program in place, even a simple misdemeanour gun charge can result in years in prison.

The law also gives the State’s Attorney Office authority to federally prosecute all those who use guns in crimes involving drugs or violence, as well as those with prior criminal convictions.

Are there handguns that are illegal in Maryland?

Yes, Maryland prohibits the possession, use, and sale of “assault pistols”. Examples of assault weapons include:

Anyone caught in possession or selling one of these pistols will face harsh penalties, including up to three years in prison and a fine of up to $5,000.

What are the potential defenses against gun crimes in Maryland?

When charged with a gun crime, it is advisable for you to engage a team of experienced attorneys to help you go head-to-head with harsh prosecutors. There are several potential defenses that some lawyers have used in the past to keep their clients jail-free.

Below is a list of potential defenses that can be used against gun crimes: